For Immediate Release
Office of the Press Secretary
November 10, 2006

THE PRESIDENT: I want to thank Senator Reid and Senator Durbin. Dick and I have had a really good discussion with them. The elections are over, the problems haven't gone away. And I assured the senators that we will cooperate as closely as we can to solve common problems. I of course said this after I congratulated them on great victories. I know they were proud of their team's efforts, and they ran good campaigns and they talked about issues that the people care about, and they won. 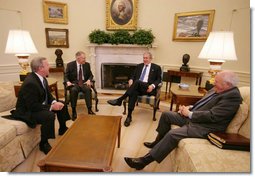 My attitude about this is that there is a great opportunity for us to show the country that Republicans and Democrats are equally as patriotic and equally concerned about the future, and that we can work together. Senator Reid and I are both from the West. I'm from West Texas, he's from Nevada. And we tend to speak the same language, pretty plain spoken people, which should bode well for our relationship.

So I appreciate you all coming. I'm really looking forward to working with you.

SENATOR REID: Mr. President, thank you for having us here. This has been an excellent discussion. We talked about issues that are important to our country. Election is over. The only way to move forward is with bipartisanship and openness, and to get some results. And we've made a commitment, the four of us here today, that's what we're going to do.

THE PRESIDENT: Thank you, sir. Dick, do you want to say something?

SENATOR DURBIN: Well, I thank the President and the Vice President for meeting with us. We talked about a lot of important issues. On Veteran's Day we talked a lot about Iraq and our soldiers and their families, which means so much to all of us.

We talked about our agenda, moving forward on an agenda, finding things that we can agree on to start off on the right foot. I think that's important. This is a day for looking forward, as we should, instead of looking backwards to past battles and past elections.

I do want to say thanks personally to the President and Vice President for their conciliatory gesture by wearing blue ties today. (Laughter.) From our side, we think that is a symbolic indication we're off to a good start.

THE PRESIDENT: I was hoping you would notice, Senator. Thank you all.