For Immediate Release
Office of the Press Secretary
November 10, 2006

Fact Sheet: President Bush Dedicates the National Museum of the Marine Corps and Announces He Will Award Corporal Jason Dunham the Medal of Honor

THE PRESIDENT: Thank you all. Thank you for the warm welcome. General Hagee, thank you for your service to our country. Secretaries of the Army and Navy and Air Force; I'm proud to be here with the Chairman of the Joint Chiefs of Staff, General Pete Pace, the first United States Marine to have ever held this position. (Applause.) Senator Warner and Congresswoman Davis; former Governor Warner and former Senator Glenn; honored guests, veterans; General Christmas and all those responsible for this fine museum, United States Marines everywhere: Please join me in wishing a very happy Marine Corps Birthday to every man and woman who has ever worn the eagle, the globe and the anchor. (Applause.) 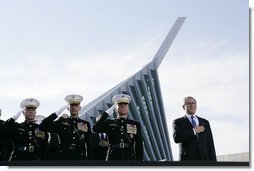 As Jim Lehrer reminded you, we celebrate the 231st birthday of one of the world's premier fighting forces. And we mark the opening of our nation's most modern military museum. For too long, the only people to have direct experience of the Marine Corps have been the Marines, themselves -- and the enemy who's made the mistake of taking them on. (Applause.) The National Museum of the Marine Corps fixes this problem. In this museum, you will experience life from a Marine's perspective. In this museum, you'll feel what it's like to go through boot camp -- no, thanks -- (laughter) -- make an amphibious landing under fire, or deploy from a helicopter in Vietnam.

The museum will not make you into a Marine. Only a drill instructor can do that. But by putting you in the boots of a Marine, this museum will leave you with an appreciation of the rich history of the Corps, and the pride that comes with earning the title United States Marine. (Applause.)

The history of the Corps is as important to each Marine as his rifle. Every Marine knows the Corps traces its founding to a Philadelphia tavern in 1775. Every Marine can name the famous battles, legends and heroes that stretch from the Halls of Montezuma to the deserts of Iraq. Every Marine understands that the Corps' reputation for honor and courage is a sacred inheritance from Marines past, and a solemn trust to be passed on to Marines to come. The Marines believe that you cannot know what you stand for if you do not know where you came from -- and they teach their history because they are determined to repeat it.

The history of the Corps is now preserved within these walls. Many of you here today do not need a museum to tell you this history because you wrote it yourselves with your sweat and your sacrifice in places like Tarawa, Chosin, and Khe Sahn. These walls pay tribute to your contributions to American freedom. These walls remind all who visit here that honor, courage, and commitment are not just words. They are core values for a way of life that puts service above self. And these walls will keep the history of the Marine Corps alive for generations of Americans to come. This is an important place, and I thank you for supporting it. 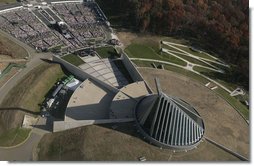 The museum is shaped in the form of the famous photograph of the flag raising on Iwo Jima. Iwo Jima is one of the most important battles in American history. It is fitting that Iwo Jima is one of the most important exhibits in this museum. The Japanese who defended that island had learned from costly battles that they could not defeat American forces. Yet, they believed that by inflicting maximum casualties on our forces, they would demoralize our nation and make America tire of war.

In that battle, the Japanese succeeded in taking the lives of more than 6,000 men. They did not succeed in stopping the Marines from achieving their mission. And that flag that was raised on Mount Suribachi would become an enduring symbol of American resolve, and a lasting icon of a democracy at war.

Like the Marines who have come before them, this new generation has also given some of its finest men in the line of duty. One of these fine men was Jason Dunham. Jason's birthday is November the 10th, so you might say that he was born to be a Marine. And as far back as boot camp, his superiors spotted the quality that would mark this young American as an outstanding Marine: his willingness to put the needs of others before his own.

Corporal Dunham showed that spirit in April 2004, while leading a patrol of his Marines in an Iraqi town near the Syrian border. When a nearby Marine convoy was ambushed, Corporal Dunham led his squad to the site of the attack, where he and his men stopped a convoy of cars that were trying to make an escape. As he moved to search one of the vehicles, an insurgent jumped out and grabbed the Corporal by the throat. The Corporal engaged the enemy in hand-to-hand combat. At one point he shouted to his fellow Marines, "No, no, no, watch his hand." Moments later, an enemy grenade rolled out. Corporal Dunham did not hesitate; he jumped on the grenade to protect his fellow Marines, he used his helmet and his body to absorb the blast. 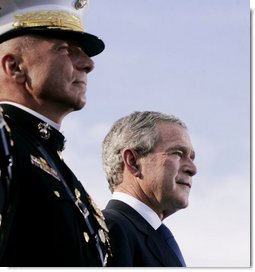 A friend who was there that terrible day put it this way: "Corporal Dunham had a gift from God. Everyone who came in contact with him wanted to be like him. He was the toughest Marine, but the nicest guy. He would do anything for you. Corporal Dunham was the kind of person everybody wants as their best friend." Despite surviving the initial blast and being given the best of medical care, Corporal Dunham ultimately succumbed to his wounds. And by giving his own life, Corporal Dunham saved the lives of two of his men and showed the world what it means to be a Marine.

Corporal Dunham's mom and dad are with us today on what would have been this brave young man's 25th birthday. We remember that the Marine who so freely gave his life was your beloved son. (Applause.) We ask a loving God to comfort you for a loss that can never be replaced. And on this special birthday, in the company of his fellow Marines, I'm proud to announce that our nation will recognize Corporal Jason Dunham's action with America's highest decoration for valor, the Medal of Honor. (Applause.)