For Immediate Release
Office of the Press Secretary
November 9, 2006

PRESIDENT BUSH: It is my pleasure to have welcomed the President-elect of Mexico here to the Oval Office. I have had a fascinating and important conversation. This is a man who won a very good election. I'm proud of the Mexican people for conducting an election that is -- was open and honest. We've spent a lot of time talking about vital issues. I have made it very clear to the President-elect that Mexico is a priority of this administration. 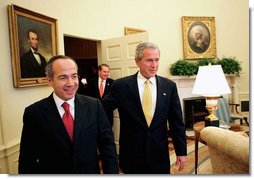 I know a fair amount about Mexico; after all, I was the governor of Texas. I assured him that we will work very closely together. We talked about trade. We talked about mutual interests, fighting drugs, and we talked, of course, about migration. And I assured the President-elect that the words I said in the very Oval Office that we sit about a comprehensive immigration vision are words I still believe strongly.

And so I want to welcome you here. I wish you all the best as you -- on your inauguration, on your big day. And I'm looking forward to working very closely with you.

PRESIDENT BUSH: Did you understand that?

PRESIDENT-ELECT CALDERON: (As translated.) President Bush and I had a very good conversation today. And we reaffirmed the purpose that we both had, which is to strengthen the bilateral relationship between Mexico and the United States even more.

I expressed to President Bush my concern regarding the issue of migration. President Bush was very open to all the arguments that I have presented to him. And we both stressed the need to have a comprehensive vision with which we can move forward. This is, of course, an extremely important issue. It is not the only issue in our bilateral relationship.

And we were able to have a conversation between two people -- two people who have very much in common. And we both look forward to a very constructive relationship in the future.