For Immediate Release
Office of the Press Secretary
November 5, 2006

THE PRESIDENT: Today, Saddam Hussein was convicted and sentenced to death by the Iraqi High Tribunal for the massacres committed by his regime in the town of Dujayl. Saddam Hussein's trial is a milestone in the Iraqi people's efforts to replace the rule of a tyrant with the rule of law -- it's a major achievement for Iraq's young democracy and its constitutional government. 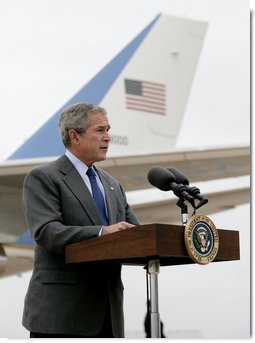 During Saddam Hussein's trial, the court received evidence from 130 witnesses. The man who once struck fear in the hearts of Iraqis had to listen to free Iraqis recount the acts of torture and murder that he ordered against their families and against them. Today, the victims of this regime have received a measure of the justice which many thought would never come.

Saddam Hussein will have an automatic right to appeal his sentence; he will continue to receive the due process and the legal rights that he denied the Iraqi people. Iraq has a lot of work ahead as it builds its society that delivers equal justice and protects all its citizens. Yet history will record today's judgment as an important achievement on the path to a free and just and unified society.

The United States is proud to stand with the Iraqi people. We will continue to support Iraq's unity government as it works to bring peace to its great country. We appreciate the determination and bravery of the Iraqi security forces, who are stepping forward to defend their free nation. And we give our thanks to the men and women of America's Armed Forces, who have sacrificed so much for the cause of freedom in Iraq -- and they've sacrificed for the security of the United States. Without their courage and skill, today's verdict would not have happened. On behalf of the American people, I thank every American who wears the uniform, I thank their families -- and I thank them for their service and continued sacrifice.