For Immediate Release
Office of the Press Secretary
November 4, 2006

THE PRESIDENT: Good morning. I'm speaking to you today from the Mile High Coffee Shop in Englewood, Colorado. Mile High Coffee was founded by Brian Verbeck who is the city's entrepreneur of the year. I'm here to have a cup of his famous coffee, and have breakfast with a group of local entrepreneurs to discuss our strong and growing economy. 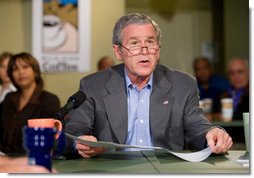 Yesterday, we received more good news about our economy. The national unemployment rate has dropped to 4.4 percent. It's the lowest rate in more than five years. Over the past three months, America has added 470,000 new jobs, for a total of more than 6.8 million new jobs since August of 2003. Real wages rose 2.4 percent over the past year, which means an extra $1,327 for the typical family of four with two wage earners. Americans are finding jobs, and they're taking home more pay.

The main reason for our growing economy is that we cut taxes and left more money in the hands of families and workers and small business owners. Entrepreneurs like the ones I'm having breakfast with this morning have put that money to good use. They expanded their businesses and they're creating jobs in their communities.

One of the entrepreneurs with me today is Duke Hanson, the cofounder of a company called Crocs. Crocs produces a hugely popular line of lightweight shoes, and over the past three years, they've expanded dramatically. Three years ago, Crocs had just 11 employees. Today, Crocs provides jobs for hundreds of Americans, and his shoes are sold all over the world. Duke calls this, "rocket ship growth." Here's what he says: "We're bringing a lot of money in. We're employing people and providing a product that millions of people love."

Another entrepreneur with me today is Rich Lewis. Rich is the founder, president, and CEO of a technology company called RTL-Networks. Rich's company sells and maintains computer network hardware and infrastructure. His business is growing, as well. Over the past four years, RTL-Networks has expanded from one to 19 employees. Rich says, "We've been growing. I feel more secure now as an entrepreneur and business owner, and I see continued growth."

A third entrepreneur with me today is Luke Schmieder. He's the chairman and CEO and cofounder of Mesa Labs. His company sells kidney dialysis products, electronic measuring instruments, and biological indicators, which means they use technology to meet people's health care needs. His company got off to a rough start, until Luke mortgaged his house to turn things around. In the past six years the company has grown 34 percent. Luke says, "Revenues are up, earnings are up. I say it's a good economy right now."

Our tax cuts have helped businesses like these create jobs and deliver prosperity across Colorado and across the nation. Yet Democrats in Washington have consistently opposed cutting taxes. They predicted that the tax cuts would not create jobs, would not increase wages, and would cause the federal deficit to explode. American workers and entrepreneurs have proved all those predictions wrong.

But the Democrats are still determined to raise taxes. And if they gain control of the Congress they can do so without lifting a finger. Under current law, many of the tax cuts we passed have to be renewed by Congress or they will expire. In other words, if Congress fails to act your taxes will automatically go up. If Democrats take control of the House, the committee in charge of all the tax legislation would be chaired by a Democrat who recently said he can't think of one of our tax cuts he would extend. And if there's no legislation to renew and extend the tax cuts, every tax rate will go back up to its old higher level.

I can't find a radio station that carries the radio address. Do any stations in Pomona carry it?
Click here for answer....

The choice you make on Tuesday will have a direct impact on our economy, on the small businesses that are creating jobs, and on the workers who depend on them. The last thing American families and small businesses need now is a higher tax bill, and that is what you'll get if the Democrats take control of the Congress.

America needs leaders in Washington who understand that you know how to save, spend, and invest your money better than the federal government. And we need leaders who will work to make the tax relief we delivered permanent. And now the decision is in your hands, and however you decide, I urge you to get out and vote on Tuesday.

I appreciate you listening.