For Immediate Release
Office of the Press Secretary
October 28, 2006


We were pleased to continue our consultations today. Via secure video, we discussed a range of issues of great importance to our common mission in Iraq, including the development of Iraqi security forces, efforts to promote reconciliation among all Iraqis, and the International Compact for Iraq and the economic reforms associated with it. As leaders of two great countries, we are committed to the security and prosperity of a democratic Iraq and the global fight against terrorism which affects all our citizens. 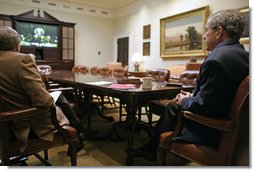 We have three common goals: accelerating the pace of training the Iraqi Security Force, Iraqi assumption of command and control over Iraqi forces, and transferring responsibility for security to the Government of Iraq. We have formed a high-level working group including the Iraqi National Security Advisor, Minister of Defense, Minister of Interior, General Casey, and Ambassador Khalilzad to make recommendations on how these goals can be best achieved. This working group will supplement existing mechanisms to better define our security partnership and enhance our coordination.

We are committed to the partnership our two countries and two governments have formed and will work in every way possible for a stable, democratic Iraq and for victory in the war on terror.