For Immediate Release
Office of the Press Secretary
October 27, 2006

THE PRESIDENT: I'm proud to welcome the Secretary General of NATO here to the Oval Office. We've just had a fascinating discussion.

First, Mr. Secretary General, you've been a very strong leader. As a matter of fact, you've made NATO a values-based organization that is capable of dealing with the true threats of the 21st century. I appreciate your leadership. I particularly appreciate the fact that you have led the 26 nations of NATO into Afghanistan to help this young democracy. You know what I know, that the real challenge for the future is to help people of moderation and young democracies succeed in the face of threats and attacks by radicals and extremists who do not share our ideology, have kind of a dark vision of the world. 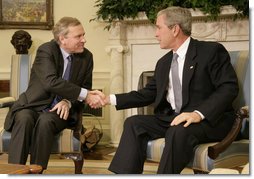 I appreciate the fact that you're reaching out to global partners, nations which share our value, but have not been considered a -- necessarily considered a part of NATO. I want to thank your view of making sure NATO continues to provide the opportunity for other nations to join NATO.

I'm looking forward to Riga. The Riga summit is a time for us to celebrate the great successes of this partnership. Mr. Secretary General and I will be there reminding our partners that we have a lot of work to be done in the noble cause of peace.

SECRETARY GENERAL de HOOP SCHEFFER: Mr. President, thank you very much, and thank you for giving me your time. I can echo your words. NATO is delivering security in the 21st century. And that means defending values, and that means defending values not only in Europe, but far away from NATO's traditional area. And the case in point, of course, is Afghanistan, where there was a regime which was grossly violating human rights, no women's rights, public executions. There we are trying to assist the Afghan government to establish democracy, to establish human rights, to establish those values.

And let me -- let me say that when, in those actions of NATO, of those brave NATO soldiers, civilians are killed, as happened two days ago, that's always a tragedy. That's a tragedy.

Mr. President, I'm looking forward to the Riga summit, where we'll see a 21st century NATO delivering security in many, many places of the world with 50,000 soldiers, including many Americans, on three continents. That is the challenge, but I can tell you that NATO is up to the challenge, NATO is delivering security, and NATO will continue to do this, indeed, with its presence, but also with global partners, because terrorism, proliferation, failed states and failing states are global threats we have to face and to counter on a global scale. 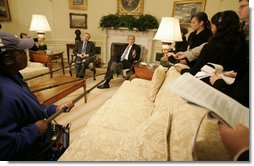 Mr. President, once again, thank you very much for being here.

THE PRESIDENT: Yes, sir. I'll answer a couple of questions this morning. Jennifer.

Q Thank you, sir. What does it say to you that Iran is doubling its enrichment capacity?

THE PRESIDENT: It says to me that we must double our effort to work with the international community to persuade the Iranians that there is only isolation from the world if they continue working forward on such a program. And I've read the speculation about that that's what they may be doing, but whether they've doubled it or not, the idea of Iran having a nuclear weapon is unacceptable, and it's unacceptable to the United States and it's unacceptable to nations we're working with in the United Nations to send a common message.

Q Sir, do you agree with the Vice President that a dunk in the water is a "no brainer" when it comes to interrogating a terror suspect?

PRESIDENT BUSH: This country doesn't torture, we're not going to torture. We will interrogate people we pick up off the battlefield to determine whether or not they've got information that will be helpful to protect the country.

Q Mr. President, with the elections just about 10 days away, polls show that voters are more disenchanted with the Republican-led Congress than at any time since 1994, when the Democrats lost power. What explanation or answer do you have for people who feel that way?

PRESIDENT BUSH: I understand people here in Washington have already determined the outcome of the elections. As I said in my press conference the other day, I've seen it before where people start measuring the drapes in their new offices before the vote has been counted -- in other words, they're taking the people's vote for granted.

This election is going to be determined by how our candidates run locally. And I believe if they continue to emphasize the big issues -- keeping taxes low, and protecting the American people -- we'll win. And so we'll see how the outcome comes. I know there's a lot of speculation here in Washington, D.C., and there's a lot of fascination about listening to these pundits and people who are giving their opinions.

All I can tell you is what I see: I see enthusiasm amongst Republicans, I see candidates who are saying, vote for me, I will work to make sure America doesn't get attacked again. And I'm seeing candidates saying, I understand that if we run up your taxes like the Democrats do, it's going to hurt this economy, and so we'll keep your taxes low.