For Immediate Release
Office of the Press Secretary
October 26, 2006

THE PRESIDENT: Thank you all. Thanks. Please be seated. I'm pleased that you all are here to witness the signature of the Secure Fence Act of 2006. This bill will help protect the American people. This bill will make our borders more secure. It is an important step toward immigration reform.

I want to thank the members of Congress for their work on this important piece of legislation. I welcome you here to the White House. I'm looking forward to signing this bill. 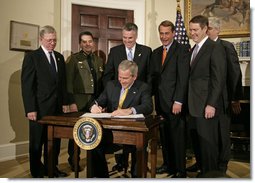 I appreciate the Vice President joining us today. I thank the Deputy Secretary, Michael Jackson, of the Department of Homeland Security. Rob Portman -- he happens to be the Director of OMB. I want to thank Ralph Basham, who is the Commissioner of the U.S. Customs and Border Protection. David Aguilar is the Chief of the U.S. Border Patrol.

Earlier this year, I addressed the nation from the Oval Office. I laid out our strategy for immigration reform. Part of that strategy begins with securing the border. Since I took office we have more than doubled funding for border security -- from $4.6 billion in 2001 to $10.4 billion this year. We've increased the number of Border Patrol agents from about 9,000 to more than 12,000, and by the end of 2008, we will have doubled the number of Border Patrol agents during my presidency.

We've deployed thousands of National Guard members to assist the Border Patrol. We've upgraded technology at our borders. We've added infrastructure, including new fencing and vehicle barriers. We're adding thousands of new beds in our detention facilities so we can continue working to end catch and release at our southern border. During the course of my administration we have apprehended and sent home more 6 million people entering our country illegally. And I thank the Border Patrol for their hard work.

The Secure Fence Act builds on this progress. The bill authorizes the construction of hundreds of miles of additional fencing along our southern border. The bill authorizes more vehicle barriers, checkpoints and lighting to help prevent people from entering our country illegally. The bill authorizes the Department of Homeland Security to increase the use of advanced technology, like cameras and satellites and unmanned aerial vehicles to reinforce our infrastructure at the border. We're modernizing the southern border of the United States so we can assure the American people we're doing our job of securing the border. By making wise use of physical barriers and deploying 21st century technology we're helping our Border Patrol agents do their job.

The Secure Fence Act is part of our efforts to reform our immigration system. We have more to do. Meaningful immigration reforms means that we must enforce our immigration laws in the United States. It is against the law to hire someone who is here illegally. We fully understand that most businesses want to obey that law, but they cannot verify the legal status of their employees because of widespread document fraud. So we're creating a better system for verifying documents and work eligibility, and in the meantime, holding people to account for breaking the law.

We must reduce pressure on our border by creating a temporary worker plan. Willing workers ought to be matched with willing employers to do jobs Americans are not doing for a temporary -- on a temporary basis.

We must face the reality that millions of illegal immigrants are already here. They should not be given an automatic path to citizenship; that is amnesty. I oppose amnesty. There is a rational middle ground between granting an automatic pass to citizenship for every illegal immigrant and a program of mass deportation. And I look forward to working with Congress to find that middle ground.

The bill I'm about to sign is an important step in our nation's efforts to secure our border and reform our immigration system. I thank the members of Congress for joining me as I sign the Secure Fence Act of 2006.