For Immediate Release
Office of the First Lady
October 24, 2006

MRS. BUSH: This is such a huge honor. I'm a lifelong admirer of Pearl Buck. And I'll have to say, back in the days when I was reading The Good Earth in high school, I would have never, ever guessed that I would have gotten to go to Pearl S. Buck's home and to be honored in this way. Thank you, John, thank you very much for the great work you're doing here as Chairman of Pearl S. Buck International. 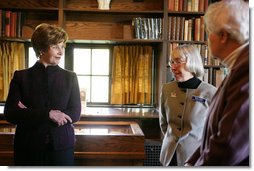 I also want to acknowledge Congressman Mike Fitzpatrick. Thank you very much, Congressman, for joining us today. Thank you for your role in securing the Save America's Treasures grant for the Pearl S. Buck home.

Janet, President and CEO of the Pearl S. Buck International, thank you very, very much. And I also want to recognize Pearl Buck's two daughters, Janice Walsh and Julie Henning, who are with us today. It's an honor and a thrill to have the chance to meet both of you.

Board members, staff members, volunteers and Pearl S. Buck enthusiasts, I'm honored to be with you today, and to receive the Pearl S. Buck Woman of the Year Award. Thank you all very, very much.

For more than four decades, the initiatives of Pearl S. Buck International have advanced humanitarian causes embraced by your namesake. As the first international agency to arrange inter-racial adoptions, Welcome House has eliminated the barriers of prejudice and found loving homes for more than 5,000 children. In six Asian countries, Opportunity House provides needy children -- children neglected because of racial discrimination, or the stigma of HIV/AIDS -- with quality health care and a good education.

And with support from a competitive Save America's Treasures grant, the historic Pearl S. Buck House serves as an enduring monument to Ms. Buck's legacy. For 38 years, Pearl Buck lived here at Green Hills Farm with her international family -- transforming the images, stories, and memories collected during her years in Asia into books that won her Nobel and Pulitzer Prizes. Through the interactive tours here, exhibits, and educational programs, Pearl S. Buck International fosters a greater appreciation of other lands and cultures -- a goal to which Pearl Buck dedicated her life and her work.

The success of these programs, and the tremendous interest in Pearl Buck's home and life, are testaments to her influence as a writer. Pearl Buck spent almost 40 years in the Far East, first as the daughter of missionaries, and later as a wife, mother, student, teacher, and author. Chinese was her first language, and her observations of agrarian life in rural China, and of that country's tumultuous revolutions, are so vivid and compelling because she lived them. 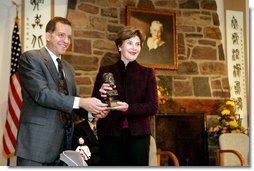 The books in which Pearl Buck documented this history have educated millions of readers -- including me. Like many Americans, I was introduced to Pearl Buck in high school, when I read The Good Earth. As an adult, I've continued to collect and enjoy her books. I treasure my copy of The Living Reed -- Ms. Buck's novel of modern Korean history -- which was given to me by the wife of our ambassador to South Korea, on the first trip there that President Bush and I made.

With these and scores of other books, Pearl Buck made tremendous contributions to America's literary tradition. And through her humanitarian efforts in the countries where she lived and wrote -- including the United States -- Ms. Buck built on an even greater American tradition: one of extending equality, justice, and compassion to people in need.

Today, you may be interested to hear about some of the ways you and your fellow Americans are, through our government, continuing Pearl Buck's legacy.

Pearl Buck was dedicated to advancing women's rights. And in Afghanistan now, the American people are bringing women and girls, marginalized for years by the Taliban, back into the center of Afghan society. By supporting the U.S.-Afghan Women's Council, the United States is providing Afghan women with jobs so they can support themselves and their families. Through the Women's Teacher Training Institute in Kabul, we're providing women and girls across Afghanistan with teachers so that they can be educated.

Around the world, through programs like the President's Malaria Initiative, and the President's Emergency Plan for AIDS Relief, the American people are contributing billions of dollars so that millions of people can enjoy lives free from malaria, HIV/AIDS, and other devastating illnesses.

Pearl Buck was committed to improving educational opportunities for children. Today, across the globe, 100 million children are not in school. But just this year, the American people have provided more than half a billion dollars to support educational initiatives abroad. These include programs like the African Education Initiative, a $600 million commitment that's providing millions of textbooks to African schoolchildren, and that has already trained more than 400,000 teachers in sub-Saharan Africa.

I'm proud of the work that the United States, aided by private organizations like Pearl S. Buck International, is doing to help the people of many nations build a healthier, more just, and more hopeful world for their children.

Thank you very much for this award. Most of all, thank you for carrying on the compassionate legacy of Pearl S. Buck: a talented writer, an esteemed humanitarian, and a distinguished American woman.