For Immediate Release
Office of the First Lady
October 19, 2006

MRS. BUSH: Thank you, John, thank you for your nice remarks and the great work you're doing as Chairman of the Advisory Council on Historic Preservation. Governor Landrieu, thank you very much for joining us today in this absolutely magnificent Customs House building. There's no better place for this meeting than here in New Orleans. Lynn Scarlett, the Deputy Secretary of the U.S. Department of Interior, thank you very much for joining us, as well. 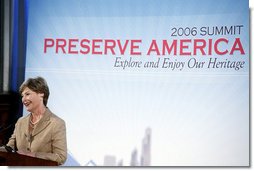 Thanks to each and every one of you for what you do every day to protect our special culture and soul of the United States. (Applause.)

Welcome, everyone, to the Preserve America Summit. Today we gather to mark 40 years of national historic preservation.

The National Historic Preservation Act originated, as John told us, as a response to rapid urban development and highway construction that threatened historic neighborhoods across America during the 1960s. Today, we still face some of these challenges, but we also face a new set of preservation challenges. Modern technologies must be adapted to help safeguard our national icons. The historical narrative we preserve must include the contributions of many cultures, and tell the stories of all Americans. And as we protect our country's history for our children and grandchildren to enjoy, we also must educate American children so that they'll continue our work when we're gone.

Over the last 40 years, the challenges of preserving our national treasures have evolved, and the federal government's approach to protecting our heritage must evolve with them. 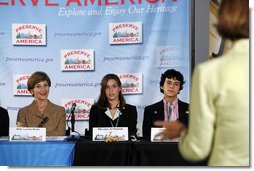 Over the last three years, we've honored historical organizations, history teachers, and entire communities -- 401 of them, in fact -- for their commitment to preservation. But one of the most valuable contributions of the Preserve America Initiative is this Summit, which will build on the legacy of the National Historic Preservation Act by bringing our country's approach to historic preservation into the 21st century.

Many of you have already been hard at work on this task. Throughout the summer, in pre-summit forums, you've analyzed how businesses, foundations, educational institutions, governments, and private citizens can modernize historic preservation throughout the United States. You've shown how we can encourage young people to be good stewards of our historical and cultural treasures, by encouraging their teachers to use historical sites as educational resources. And you've discussed how communities throughout the country can use their cultural attractions to benefit local economies.

Now, this is especially important here on the Gulf Coast, where well-preserved and well-presented history can revive local tourism and speed economic recovery. In the aftermath of the hurricanes, private foundations and federal cultural organizations have given millions of dollars in grants to revitalize museums, libraries, and arts institutions throughout Louisiana and Mississippi.

Here in New Orleans, local preservation groups have fanned out into the city's historic neighborhoods, showing residents how their homes -- from Creole cottages to shotgun houses -- can be reclaimed, offering residents expertise and comfort and hope.

Representatives of many of these organizations are here today, and have offered their insights on how cultural institutions across the United States can be better prepared for a disaster. Thank you for these contributions, and thank you for the important preservation work you're doing here on the Gulf Coast. (Applause.)

In addition to governments, the private sector -- businesses, philanthropic groups, historical organizations, educational institutions, and private citizens -- also have a crucial role to play. Public-private partnerships are already supporting excellent preservation work throughout our country, and they'll be vital to preserving our national treasures in the years ahead.

First settled in 1623, Gloucester has witnessed almost four centuries of American history. The city's archives contain records from the earliest New Englanders, the American Revolution, and the Civil War. The seaside enclave's rocky shores and sunsets have inspired great American artists like Winslow Homer and Fitz Henry Lane, and gave rise to the Luminous school of American painting.

The heart of Gloucester, however, has always been fishing. For nearly 400 years, Gloucestermen have braved the Atlantic in pursuit of cod, haddock, halibut, and swordfish. The perils confronted by Gloucester fishermen inspired Rudyard Kipling to chronicle their adventures in his novel Captains Courageous. A more somber testament to Gloucester's bond with the ocean is found at the water's edge, where the town's famous "Man at the Wheel" statue pays tribute to the 5,000 Gloucestermen lost at sea.

But in recent decades, fishing dwindled. Gloucester's angling industry has gradually been replaced by manufacturing, technology and tourism. Only 30 miles from Boston, Gloucester is increasingly becoming a commuter satellite, prompting concerns among residents that their community will soon lose its distinctive heritage. "We recognize that the town has to change," says the chair of the Gloucester's Historical Commission, Maggie Rosa. "The question is, how do you do it?"

The Gloucester community is determined that those changes will respect the history and traditions that make their town unique. The local government has pledged to renovate Gloucester's 130-year-old City Hall. Local volunteers spend hours in the hall's basement every day maintaining the city's archives, which date back to 1642.

Every year, the city stages a schooner festival to recreate the era when hundreds of clipper ships and schooners dotted the harbor. Historical organizations are working to preserve Cape Ann's iconic paint factory -- which manufactured the copper paint that kept barnacles off the bottom of fishing boats -- as well as the facility where Clarence Birdseye first developed his process for freezing and preserving food.

And the entire Gloucester community -- nonprofit groups, local businesses, and private citizens, with federal support from Save America's Treasures and Preserve America -- has come together to preserve the Adventure: the last authentic schooner from Gloucester's old fishing fleet.

Safeguarding Gloucester's maritime heritage has energized the town's residents, including nearly 1,300 volunteers who devote their time and energy to these preservation projects. According to the town's mayor, John Bell, Gloucester people view keeping their community authentic as a personal calling. Salty old Gloucestermen will come up to him and say, "Mayor, that's my building. Keep it that way. It's been that way forever."

That sense of personal connection to the town's history, Mayor Bell says, "is part of the mentality -- it's the soul of the city." Gloucester people are keeping their city's soul alive. They're preserving priceless icons of their history -- and America's -- because, as Mayor Bell explains, they "have no other choice. We love Gloucester -- and this history is part of who we are." Ladies and gentlemen, we have no other choice. (Applause.)

Across the United States -- from the seaport of Gloucester, to farming communities in Texas, to mining communities in Colorado, and of course here in New Orleans and all along the Gulf shore -- Americans are working to preserve the local culture that defines who we are, and that's so very important for our country.

Thanks to each and every one of our federal preservation partners for your contributions over the last 40 years of preservation, and for supporting this Summit to improve our government's approach to preservation in the 21st century. Thanks to all of the scholars, the experts and the dedicated preservationists here for your hard work throughout the summer and over the next two days. And thanks to each and every one of you for your commitment to protecting the rich history and culture of the United States of America.