For Immediate Release
Office of the First Lady
October 18, 2006

Mrs. Bush's Remarks After a Visit to the Ben Franklin: In Search of a Better World Exhibit
Houston Museum of Natural Science
Houston, Texas

MRS. BUSH: I just want to thank you all for coming out. I'm glad you're covering this show that's here at the Houston Museum of Natural Science, the show on Benjamin Franklin.

This is the 300th anniversary of Benjamin Franklin's birth, and we hosted at the White House earlier this year a birthday party for Benjamin Franklin, and when we did, this show that's here in Houston now was in Philadelphia. So I determined then that I'd come see the show when it was in Houston. 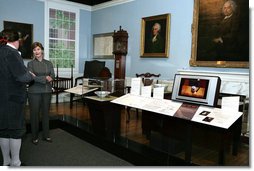 I know that there's a lot of great curriculum that was associated, developed with this show that history teachers or social studies teachers or science teachers can use. And I think it's all available on the Internet, is that right? And that's what these classes that are here, that are visiting the show today have done.

One school, Billy Baines Middle School, is spending a whole year studying Franklin. And there's a lot to study. He was such an incredible human being. He was really the one who invented the idea of the American nation, of the states that can come together and make an American nation. And that was what he did just for our country, besides all the other many scientific inventions -- the discovery of electricity with the famous experiment with the kite and the key on the kite's tail.

So I want to thank you all for coming out. This was great fun to get to be with these students who are already experts on Benjamin Franklin. I want to encourage people in Houston and the whole area who haven't been to the show to come, to bring your children. You really can learn a lot about the founding of our country and about so many inventions that Franklin did. 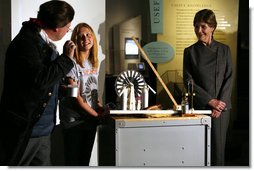