For Immediate Release
Office of the Press Secretary
October 13, 2006

President's Statement on H.R. 4954, the "Security and Accountability For Every Port Act of 2006"

THE PRESIDENT: Thank you all. Please be seated. Thank you and welcome. I'm pleased to have you here as I sign a bill that will help protect the American people and our ports. The SAFE Port Act will make this nation more prepared, more prosperous and more secure.

I want to thank the Congress for its good work. I'm pleased that key members of the Senate and the House have joined me here today, and I want to thank you for being here. I first want to thank the Secretary of Homeland Security, Michael Chertoff, for his service to the country. I appreciate that Senate Majority Leader Bill Frist has joined us. I'm pleased that Senator Susan Collins, who is the Chairman of the Senate Homeland Security and Governmental Affairs Committee, has joined us. She is one of the sponsors of the bill, as is Peter King, who's the Chairman of the House Homeland Security Committee. These two members are strong, strong chairmen and they're doing a fine job to help us protect this country. I appreciate very much Senator Bob Bennett and Senator Patty Murray and Senator Norm Coleman for joining us, as well as Congressman Dan Lungren. 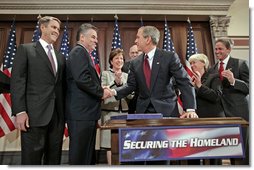 The most solemn responsibility of the federal government is to protect the American people. And since September the 11th, the administration and the Congress have worked together and we've led an unprecedented effort to safeguard our homeland. In other words, we learned the lessons of that attack. We've more than tripled spending on homeland security. We've created a federal Department of Homeland Security with a single mission: to protect the American people. We've trained and equipped hundreds of thousands of state and local first responders. We've worked with public agencies and private companies to improve security at airports and aboard commercial airliners. We've strengthened protections at bridges and tunnels and other critical infrastructure. We have a responsibility to protect the homeland and we're meeting that responsibility.

Protecting our homeland requires protecting our borders. Since I took office we more than doubled funding for border security, from $4.6 billion in 2001 to $9.5 billion in 2006. We've increased the number of Border Patrol agents, from around 9,000 to a little more than 12,000. We've upgraded technology and infrastructure along the border. We've apprehended and sent home more than 6 million people entering America illegally. This is important progress, but we've got a lot more work to do.

Last week in Arizona, I signed a bill that will allow us to hire 1,500 more Border Patrol agents, deploy advanced technology like ground-based radar and infrared cameras, add beds in our detention facilities so we can work to end catch and release. Congress also passed a bill that will authorize the construction of about 700 miles of double-layered fencing along our Southern border. I'm going to sign that bill into law. I'll continue to work with Congress to pass comprehensive immigration reform that protects our country, enforces our laws, and upholds our values.

Protecting our homeland also requires protecting our seaports. Our seaports are a gateway to commerce, a source of opportunity, and a provider of jobs. Our ports could also be a target of a terrorist attack, and we're determined to protect them.

Since September the 11th, we've launched a series of new efforts to improve port security. We worked with Congress to pass the Maritime Transportation Security Act, which required American ports and vessels to adopt strict new security measures. We made wider use of intelligence to screen cargo and target suspicious containers for inspection. We worked with foreign partners to improve their security procedures. And with the bill I sign today, we renew a clear commitment: We will work tirelessly to keep our nation safe and our ports open for business.

The SAFE Port Act will build on progress and help us protect our ports in three key ways. First, the SAFE Port Act will strengthen physical security measures at our ports by helping us harness the power of technology. The bill authorizes the development of 21st century inspection equipment, so that Customs agents can check inside cargo containers for dangerous materials without having to open them. The bill also requires radiation detection technology at our 22 busiest ports by the end of next year. America has the best technology in the world, and with this bill we will apply that technology to make our ports the safest in the world.

Second, the SAFE Port Act provides legislative authority for key elements of our port security strategy. The bill codifies into law the Container Security Initiative, which we launched in 2002. Through this initiative, we have deployed American inspectors to dozens of foreign ports on five continents where they are screening cargo before it leaves for our country.

The bill also codifies into law the Customs Trade Partnership Against Terrorism, a joint effort between the public and private sectors to improve cargo security. Under this partnership, private shippers agree to improve their own security measures, and in return, they can receive benefits including expedited clearance through our ports.

And the bill provides additional authority for the Domestic Nuclear Detection Office, which we established to guard against the threat of terrorists smuggling a nuclear device into our country.

All these efforts are smart. They're working. And with this bill, they're here to stay.

Finally, the SAFE Port Act requires the Department of Homeland Security to establish a plan to speed the resumption of trade in the event of a terrorist attack on our ports or waterways. This bill makes clear that the federal government has the authority to clear waterways, identify cleanup equipment, and reestablish the flow of commerce following a terrorist attack. We'll do everything we can to prevent an attack, but if the terrorists succeed in launching an attack, we'll be ready to respond.

We take these steps to improve our port security, and as we do so, we thank the hardworking Americans who protect our people day in and day out. We're grateful to the Coast Guard's men and women, the Customs and Border Protection officers, our port workers and managers, state and local law enforcement officers, and all those in the private sector who do their part to keep America safe. We're going to protect our ports. We're going to defend this homeland. And we're going to win the war on terror.

With that, I'm now pleased to sign the SAFE Port Act into law. (Applause.)