For Immediate Release
Office of the First Lady
October 12, 2006

MRS. BUSH: Thank you very much. Thanks to everyone, and thank you, Senator Talent, for helping women around Missouri and around the United States remember this month as Breast Cancer Awareness Month.

I want to recognize Peggy O'Dell, who is the Superintendent of the Arch. Thank you, Peggy, for letting us all be here. (Applause.) And I also want to recognize the representatives from Macy's and Federated Department Stores who are here with us, as well; the representatives from the Breast Cancer Research Foundation, who are with us tonight. Brenda Talent, Senator Talent's wife, Brenda, thank you so much for joining us. (Applause.) 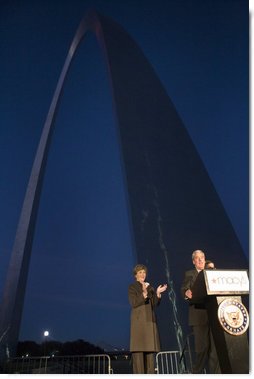 Advocates, researchers, families, friends and survivors, thank you all so much for coming out tonight to be with me as we light the Arch pink for Breast Cancer Awareness Month. Twenty-one years ago, when October was designated Breast Cancer Awareness Month, most women didn't talk about breast cancer. They were embarrassed to. And because everyone kept breast cancer a secret, women didn't have regular mammograms or perform breast self-exams, because no one told them to.

Twenty-one years ago, when women discovered they had breast cancer, they often found out too late. But thanks to the extraordinary work of many people whose lives have been touched by breast cancer, a lot has changed in 21 years.

Today, people do talk about breast cancer -- often to tell stories of triumph. Today, everyone knows what a pink ribbon stands for. Almost everyone has heard of the Race for the Cure. These races are organized in 114 cities around the world by the Komen Foundation, which was founded by my good friend Nancy Brinker, in honor of her sister, Susan Komen, who died of breast cancer.

St. Louis's first Race for the Cure was in 1999. Then, around 10,000 people participated, and 500 of them were survivors. Just seven years later, the race this June drew more than 64,000 participants, including nearly 4,000 survivors.

When these runners charge down the streets of St. Louis in a sea of pink, women pay attention. Twelve years ago, research showed that just over half of women in Missouri had a mammogram. Today, that number is closer to two-thirds. And now, every October, women in Missouri and throughout our country -- mothers, daughters, sisters, friends -- go on group outings to get a mammogram. Women are surviving because of early detection -- women like my mother, Jenna Welch. (Applause.)

One of the most spectacular ways anyone can think of to raise awareness of breast cancer is to turn a 630-foot national landmark bright pink. Thanks to Senator Talent's leadership, since 2003, the National Park Service has done just that, and illuminated the Arch in honor of Breast Cancer Awareness Month. Every October, this tribute to the pioneers who hoped for better lives out west honors a different group of pioneers -- this time the inspiring American women who hope for lives free from breast cancer. (Applause.) 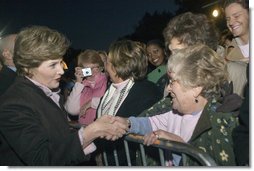 Many of these women are here tonight -- women like Verlinda Williams. Six years ago, breast cancer was the furthest thing from Verlinda's mind. She hadn't had a recent mammogram. She was more concerned about her backaches, which prompted her to undergo breast reduction surgery in August 2002.

A few weeks after the procedure, Verlinda's doctor left a message on her answering machine. A pathologist had analyzed the tissue from her surgery, and found evidence of breast cancer.

"All I could do was just sit there and cry, and think, 'How did this happen?'" Verlinda said. She soon began looking for doctors. They prescribed a difficult five-week course of radiation therapy. During the treatment, Verlinda said she was sustained by the love and support of her family and friends, and a year later, Verlinda's doctors say that her cancer has gone into remission. (Applause.)

Since her recovery, Verlinda encourages all women to be screened. She's joined Races for the Cure. Now, Verlinda says, her cousins and her friends who've been diagnosed come to talk to her about breast cancer, and she can give them her love and support. Verlinda's advice is simple: "Be positive. If you catch it early, it's not the end of the world. You just go ahead and live your life to the fullest."

I urge everyone here to help women you care about live their life to the fullest. Talk to your sisters, your mothers, your daughters, your friends about the importance of mammograms. Ladies, make your appointment tomorrow for your yearly mammogram. You'll protect your own health, and set a good example for the people who love you.

Thank you, Senator Talent and Peggy, for giving us this beautiful symbol of Breast Cancer Awareness Month. Thanks to the doctors and the researchers who are working to find a cure for this disease. Thank you to the friends and families whose love and support sustain women who are fighting breast cancer. And thanks to all of you for helping women in Missouri and across our country enjoy longer, healthier lives.

God bless you all. (Applause.) 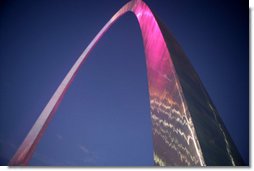