For Immediate Release
Office of the Press Secretary
October 7, 2006

THE PRESIDENT: Mr. Secretary, thank you very much. Laura and I are honored to be here to honor our dad. We appreciate you coming. Mother, it's good to see you. Members of the Bush family, all of you, distinguished members of Congress, Governor, ex-governors, the men and women of the United States Navy, military veterans, the workers who helped build this great ship: I join you -- I know you join me in saying to our father: President Bush, your ship has come in. (Laughter and applause.) 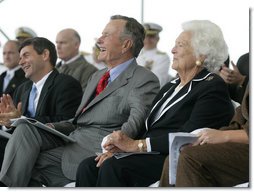 In a few minutes, my sister Dorothy will christen the newest and most advanced aircraft carrier in the Navy -- the George H. W. Bush. For the pilots of the World War II generation who are with us today, this carrier may seem a little more inviting than the ones you landed on. As you can see, our Navy has made a few upgrades. The George H. W. Bush is the latest in the Nimitz line of aircraft carriers. She is unrelenting, she is unshakable, she is unyielding, she is unstoppable. As a matter of fact, probably should have been named the Barbara Bush. (Laughter and applause.)

In accord with a long and honored tradition, we gather to christen this fine ship. We recall the service and sacrifice of earlier generations. And we pay tribute to a new generation of sailors and Marines who have stepped forward to serve in freedom's cause.

The George H. W. Bush is named for a man who exemplifies the great character of our country. On the day Pearl Harbor was attacked, George H. W. Bush was a teenager, he was a high school senior. Six months later, he was sworn into the Navy. A year later, he received his wings at a ceremony in Corpus Christi, Texas. Here is what he said. He said, "I had an ensign's stripe and an admiral's confidence." (Laughter.) "I was a Navy pilot."

Our dad would become known as one of the Navy's youngest pilots. But that wasn't his only distinction. While training along the Chesapeake Bay, the pilots in our dad's flight class learned about a beach across the way where young ladies liked to sunbathe. It became popular for the pilots to fly low over the beach. So one day he came in low to take a look. It just so happened to be the same day that a traveling circus had set up its tents. Dad's flyover upset an elephant, causing him to break lose and make a run throughout the town. He was called in for a reprimand from his commander. He puts it this way, "I was grounded for causing an elephant stampede" -- probably the only Navy pilot in American history who can make that claim.

After training, he was assigned to a light carrier. He took part in the Great Turkey Shoot of the Marianas. He knew the horror of kamikaze attacks. He would complete 58 combat missions. These were tough days, but he had something that kept him going. And if you look closely at the photographs of the planes he flew, you will find what kept him going in the name he had painted under his cockpit: Barbara. 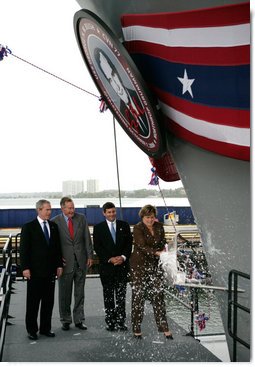 One of Dad's most important missions was a strike on a radio tower on an island called Chichi Jima. The Japanese were using that tower to intercept U.S. military radio transmissions and alert the enemy about impending American air strikes. On September 2, 1944, his squadron was given a simple assignment: to take it out. The pilots knew they would face heavy enemy fire, because the Japanese had fortified the island. But Dad and his fellow pilots did their duty without complaint or hesitation. During that raid, his plane was hit by anti-aircraft artillery and it caught on fire. Yet he kept his plane on course, he released his four bombs, and scored four direct hits on that tower. He headed out to sea, he ejected.

Japanese boats were sent out to capture him. And after more than two harrowing hours at sea alone in a rubber life raft, he was rescued by the crew of the USS Finback. For his action, he earned the Distinguished Flying Cross. Yet it is characteristic that from those moments aboard his life raft to this ceremony today, Dad's thoughts have always been of the two fine members of his crew who did not make it home: Radioman Second Class John Delaney and Lieutenant JG Ted White. On that day over Chichi Jima, a young American became a war hero and learned an old lesson: With the defense of freedom comes loss and sacrifice.

The George H. W. Bush honors a generation that valued service above self. Like so many who served in World War II, duty came naturally to our father. In the four years of that war, 16 million Americans would put on the uniform. And the human costs were appalling: from the beaches of Normandy to the jungles of Southeast Asia, more than 400,000 Americans would give their lives.

From the beginning of that war, there were those who argued that freedom had seen its day, and that the future belonged to the hard men in Tokyo and Berlin. Yet the war machines of Imperial Japan and Nazi Germany would be brought down by American GIs who only months before had been students, and farmers, and bank clerks, and factory hands. The generation of World War II taught the world's tyrants a telling lesson: There is no power like the power of freedom -- and no soldier as strong as a soldier who fights for a free future for his children.

The George H. W. Bush will serve as a new generation of Americans every bit as brave and selfless as those who have come before them. The 21st century -- in the 21st century, freedom is again under attack, and young Americans are volunteering to answer the call. In the years since September the 11th, 2001, more than 1.6 million Americans have volunteered to wear the uniform of the United States. Today they serve in distant lands and on far seas -- from the islands of Southeast Asia, to the Horn of Africa, to the mountains of Afghanistan and in Iraq. And once again, with perseverance, and courage, and confidence in the power of freedom, a new generation of Americans will leave a more hopeful and peaceful world for generations to come. 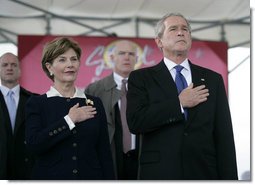 During his time in the South Pacific, Ensign Bush served on a light carrier called the USS San Jacinto. That ship was named for the 1836 battle of San Jacinto. And in that battle, the free Texas forces led by Sam Houston defeated a Mexican army that was much larger in size -- and Sam Houston succeeded in capturing the Mexican general responsible for the slaughter of the Alamo just a few weeks before. Yet on the eve of the battle, the outcome was far from certain, and the Mexicans seemed to hold the advantage. So Sam Houston called his Texans together, and he reminded them what they were fighting for. He told them, "Be men, be free men, that your children may bless their father's name."

On this proud day, the children of George H. W. Bush bless their father's name, the United States Navy honors his name, and the ship that bears his name sails into this young century as a symbol of American strength and freedom. May God watch over all those who sail this ship, all those who fly from her deck, and all those at home who pray for their safe return.

It is my honor to bring to you the 41st President, a great dad, George H. W. Bush. (Applause.)