For Immediate Release
Office of the First Lady
October 5, 2006 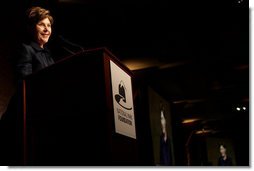 Also with us tonight is Fran Mainella, the Director of the National Park Service. Fran is the outgoing director. (Applause.) We want to thank her for what she's done. And then Mary Bomar, the Director-designate, who was confirmed by the Senate last week is here. Thank you, Mary, for joining us. (Applause.)

Thank you all. Thanks to the park superintendents and to all of the National Park Service for what you do every single day in your devotion to our national parks.

I also want to recognize in the crowd all the nature enthusiasts, the history buffs, and the rest of our distinguished guests. Thank you all very much for joining us tonight.

I'm delighted to be here with you to celebrate 40 years of the National Park Foundation. All of us can remember the first time we were amazed by a national park. My love of the parks began when I was growing up in Midland, Texas, and visited nearby Carlsbad Caverns, New Mexico, with my Girl Scout troop.

Now I hike in a national park every year with my friends that I also grew up with in Midland. We began this tradition on our 40th birthday by taking the river trip down the Colorado, and then hiking the 10 miles up the south rim of the Grand Canyon. Since then, we've visited some of our country's most magnificent parks -- Yosemite, Glacier, Yellowstone, Denali, Olympic, many more. Last year, we took our daughters, and we did that Grand Canyon trip again. Twenty years after that first visit, it was a lot harder to hike out those 10 miles. (Laughter.)

President Bush and I live in a national park. The White House reminds us of the diversity of our park system, which includes not only the wide open expanses out west, but also fascinating urban historical sites -- many right here in New York -- including Teddy Roosevelt's birthplace, Ellis Island, Federal Hall, and the African Burial Ground, which President Bush designated as a national monument just last February.

Our parks are a fantastic national resource. And through its 40 years of stewardship, the National Park Foundation has helped preserve them for future generations.

The foundation also makes the parks more accessible to today's Americans. Through the Junior Ranger program, for example, the foundation encourages young people -- especially disadvantaged and urban youth -- to explore our parks. During these visits, children learn about our country's history, our spectacular landscapes, our abundant wildlife, and some, we hope, will even become inspired to become real park rangers.

Over the last year, the foundation has raised almost $1.4 million for the Junior Rangers program. These resources help young people discover healthy new interests and learn to protect our natural resources. They also highlight the foundation's success in getting American individuals to invest in our parks.

Giving private citizens a sense of responsibility for our shared national treasures is central to the National Park Foundation's mission, and vital to the health of our national parks, because even though all parks receive federal funding, they have always also relied on the support of private citizens.

In 1872, it was the work of individual Americans, gold prospectors, fur trappers, journalists, a Jesuit priest, that led President Grant to set aside 2.2 million acres of western wilderness as a -- and I quote -- "pleasuring ground for the benefit and the enjoyment of the people." This act created Yellowstone, our country's first national park.

Ever since, our park system has been expanded, maintained and improved through support of the government and of private donors. Citizens' contributions to the park come in all shapes and sizes. Here in New York, during the 1980s, individuals, corporations and non-profit groups led by businessman Lee Iacocca secured hundreds of millions of dollars to renovate Ellis Island and the State of Liberty. This campaign was the largest park fundraising effort ever, yet it was pennies contributed by school children around the country that helped pay for Lady Liberty's new platform.

Since 1967, the National Park Foundation has encouraged private citizens to fulfill their obligations to our parks however they can -- through pennies from school children, contributions from private companies, and the very personal gifts of time and hard work from park volunteers.

More than a century ago, our national parks began as a gift from private citizens. And tonight, we recognize the individual Americans who have been good stewards of this gift, ensuring that our parks will be around for many, many generations more to enjoy.

Thank you to the National Park Foundation for leading this effort, and congratulations on your first 40 years. I wish you much success in your work for our national parks for decades to come.