For Immediate Release
Office of the Press Secretary
October 4, 2006

THE PRESIDENT: Thank you all for coming. Pretty soon, I'm going to sign an important piece of legislation that will highlight our government's highest responsibility, and that's to protect the American people. The Department of Homeland Security plays a critical role in fulfilling this responsibility every day. Since it's creation in 2003, the Department has strengthened security of our borders, airports, seaports, and other key infrastructure. It's helped give our partners in local and state law enforcement the tools they need to do their jobs. 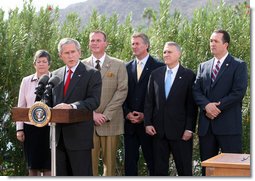 The legislation I sign today provides about $33.8 billion in funding to help secure the homeland. This is a good bill. It will help us deploy nuclear detection equipment at our ports of entry, raise security standards at the nation's chemical plants, safeguard American cities against weapons of mass destruction, and stop terrorists seeking to enter our country.

The bill will also help our government better respond to emergencies and natural disasters by strengthening the capabilities of the Federal Emergency Management Agency. This legislation will give us better tools to enforce our immigration laws and to secure our southern border.

This bill is going to make this country safe, for all our citizens, and I appreciate the members of the Congress who have joined me to witness this signing: Senator Jon Kyl, J.D. Hayworth, Trent Franks, and Rick Renzi. These members supported this good bill, and I thank them for their support. I'm also pleased that Governor Janet Napolitano has joined us. Governor, thank you for being here. We're honored to have you up here with us.

The bill I sign helps us address one of the central issues facing all states, but particularly a state like Arizona, and that's illegal immigration. I understand full well that illegal immigration puts pressure on the public schools and hospitals. It strains state and local budgets. In some communities, it increases crime. The administration and Congress have been taking decisive steps to address this issue.

Since I took office, we've increased funding for our border security from $4.6 billion in 2001, to $9.5 billion in 2006. We have increased the number of Border Patrol agents from about 9,000 to 12,000. We significantly decreased the time it takes to return illegal immigrants to their home countries. They apprehended and sent home more than 6 million people entering this country illegally. We stepped up work site enforcement against companies who knowingly hire illegal workers. We're sending a clear signal that we're a nation of law, and laws will be enforced. 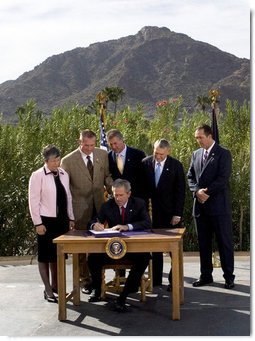 We've made progress in addressing illegal immigration, but there is a lot more work to be done. This May, I asked Congress to fund improvements in infrastructure, technology, and manpower at the border, and I appreciate Congress delivering upon my requests.

The bill I sign today includes nearly $1.2 billion in additional funding for strengthening the border, for new infrastructure and technology that will help us do our job. It provides funding for more border fencing, vehicle barriers, and lighting, for cutting-edge technology, including ground base radar, infrared cameras, and advance sensors that will help prevent illegal crossings along our southern border. That's what the people of this country want. They want to know that we're modernizing the border so we can better secure the border.

It provides funding for about 1,500 additional Border Patrol agents. In other words, this is part of a doubling of the Border Patrol that I called for earlier in my administration. I fully understand it's going to take time to recruit and train these Border Patrol, and that's why, in coordination with the governors, we deployed 6,000 National Guard members to the southern border, and they're doing a fine job.

I remember the outcry when I thought it was a good -- told the American people I thought it was a good idea to send them down there. But, thankfully, we did. And they're helping the Border Patrol. And when the Border Patrol agencies -- number of agents double, then we're not going to need the National Guard. But in the meantime, America owes them a debt of gratitude and thanks.

The bill I sign today also includes a 25 percent increase for funding for immigration and customs enforcement. This funding will help federal agents better enforce our immigration laws inside our country. It will allow us to add at least 6,700 new beds in detention centers. Part of the problem we face is that illegal immigrant that was caught sneaking into the country, and because there was no detention beds, the Border Patrol would say, why don't you check back in with us after awhile. There's no place to hold you, so check back in with the judges. And of course, they didn't check back in. It created a lot of frustration with the Border Patrol.

So we're in the process of ending catch and release. This bill will help us end catch and release. You see, when people know that they'll be caught and sent home if they enter the country illegally, they're going to be less likely to try to enter illegally in the first place.

The funds that Congress has appropriated are critical for our efforts to secure this border and enforce our laws. Yet, we must also recognize that enforcement alone is not going to work. You need comprehensive reform that provides a legal way for people to work here on a temporary basis. It's going to relieve pressure on the border. It will enable our Border Patrol agents to do a better job when we reduce the number of people trying to sneak into the country. It will free up our law enforcement officers to focus on criminals and drug dealers and terrorists and others who mean us harm.

We'll continue to work with Congress to pass comprehensive immigration reform that secures this border, upholds the laws, and honors our nation's proud heritage as a land of immigrants.

I want to thank the members of Congress who have joined me for this important bill signing. And now it's my honor to sign the Department of Homeland Security Appropriations Act for 2007.