For Immediate Release
Office of the First Lady
October 2, 2006 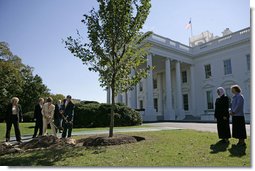 MS. MANILLA: Thank you. Thank you very much.

MRS. BUSH: And Mary Bomar, who is the New National Park Director.

Obviously, you all know that our garden here is a national park. And the trees that we're planting, this Jefferson Elm that we're replanting here in this spot, were actually developed and found by Dr. James Sherald, and he is a National Park Service employee who has worked for years on plants and disease diagnosis, especially for trees.

And this is called the Jefferson Elm that we're planting because -- tell me if this is right -- because it was found on Jefferson Street. An elm was found that seemed to be disease-resistant; is that right? Do you want to tell them something about it.

Elm has always been a signature species in the National Capital Region of the Park Service, and particularly here at the White House. But we've dealt with Dutch Elm disease here since the early '50s, and we continue to lose trees every year, and we lost an elm here just this past year from Dutch Elm disease.

So we're very privileged today to be able to put in Jefferson elms, which are resistant to Dutch Elm disease. So it's a real honor to be able to have you plant these here.

MRS. BUSH: Thank you so much.