For Immediate Release
Office of the Press Secretary
October 2, 2006

PRESIDENT BUSH: Mr. Prime Minister, welcome back to Washington. We just had a extensive and important dialogue about how Turkey and the United States can and must work together to achieve peace. We talked about our determined efforts to fight terror and extremism. We talked about our common efforts to bring stability to the Middle East. 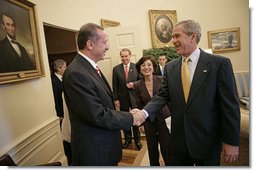 We had an important discussion about both Iraq and Iran. Our desire is for -- to help people who care about a peaceful future to reject radicalism and extremism. I made it very clear to the Prime Minister I think it's in the United States' interests that Turkey join the European Union. And I congratulate the Prime Minister and his government for the economic reforms that have enabled the Turkish economy to be strong, for the good of the Turkish people.

And finally, we shared our deep desire to improve the lives of those who are suffering in Darfur. The Prime Minister shared with me a personal account of what he saw, the suffering he saw, the human -- the pitiful human condition he personally saw in Darfur. He shared with me his government's anxiousness to help the people there, and I assured him I shared the same concern. And it's important for the United Nations and the government of Sudan to take forward steps to help it end the suffering.

I consider the Prime Minister a friend and a man of peace, and I welcome him.

PRIME MINISTER ERDOGAN: (As translated.) Distinguished members of the press, it is a great honor and pleasure to be here upon the invitation of President Bush, an ally. The United States is a strategic partner, a very important strategic partner for Turkey and an ally for many years.

In our meeting we had the opportunity to discuss many points, especially terrorism. And the joint steps that we have taken in order to pursue with determination our fight against terrorism continues to be very important in our relations. In fact, we do share the same opinion about forming a joint platform in order to combat terrorism on a global scale.

We also had opportunity to discuss Lebanon, as well as Israel and Palestine.

It was important to hear the President say that their support for Turkey's membership to the European Union will continue. We have also had the opportunity to discuss the Cyprus issue, and I have expressed our sensitivities with regard to the issues related to Cyprus. And we had an opportunity to extensively discuss what we can do in the Middle East -- what Turkey specifically can do in the Middle East.

We have also discussed Turkey's progress and reforms with regards to the European Union -- the Copenhagen political criteria, as well as Maastricht criteria, and the recent work that is ongoing with the screening process at the EU for Turkey's accession.

All in all, I think we had a very positive meeting, and I would like to thank the President for that. 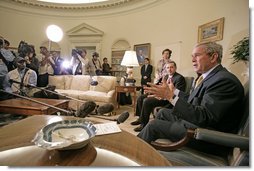