For Immediate Release
Office of the First Lady
October 2, 2006

MRS. BUSH: I'm so happy to be in the beautiful First Lady's Garden with the new Laura Bush Rose. One of the wonderful things about being First Lady is that you have flowers named for you, and it's especially nice for me, because I love to garden, I love roses. So thank you very much.

This is Bill Williams, from Harry & David, and they own Jackson & Perkins, which is the rose company that developed this rose. I'm just really thrilled. Thank you very, very much. I'm really excited to have this beautiful new rose. 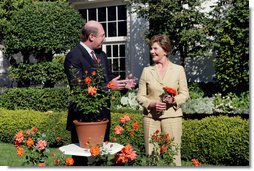 MR. WILLIAMS: Thank you, Mrs. Bush. It's a pleasure to be here. Thank you for including us in this. And this is a gorgeous rose. We're proud that you selected this rose. And, as you know, this carries on a long tradition of First Lady Roses. Our research shows that the First Lady Rose was the first First Lady, Martha Washington, in 1889 -- about 17 years after our company was founded. And we carry on that tradition today.

And it's fitting that we're here in the White House gardens, close to where President Reagan signed a proclamation in 1987, and it said the rose was the nation's floral symbol.

MR. WILLIAMS: So thank you very much for doing this. Thank your staff for all the hard work they put into it. Thank you, everybody at Jackson & Perkins, both in Wasco, California and Medford, Oregon, the United Farm Workers, who grow our roses -- all did a terrific job. And you couldn't have selected a better rose.

MRS. BUSH: Isn't it a beautiful rose. Thank you very much, Bill, I really appreciate it. Thanks so much.

But I'm so thrilled to have my own rose, so thank you very much, Bill. Thanks to all the Jackson and Perkins people who have been working to develop this rose. I'm really thrilled to have it. Thank you all.