For Immediate Release
Office of the First Lady
September 29, 2006

MRS. BUSH: Thank you all very much. Thank you, Alan, thank you for the very nice introduction. Thanks, everybody. Leone, congratulations. Leone Reeder is the Chair of the National Fund for the U.S. Botanic Gardens. I know this is a wonderful day for you and for all of us. Congressman Vern Ehlers, who is the Chairman of the Joint Committee on the Library -- Congressman, thank you for everything you've done to make sure this all happened. Jim Hagedorn, Co-chair of the Board of Trustees for the National Fund of the U.S. Botanic Gardens -- Jim, thank you for everything you've done, too. And Mr. Baldev Lamba, who is the landscape architect, the winning designer of the First Ladies' Water Garden is with us today. And of course, Holly Shimizu, the Executive Director of the U.S. Botanic Gardens. I hope every one of you know how very fortunate we are to have Holly as the Chairman of the Botanic Gardens. She's so terrific. Thank you very much, Holly, for everything you've done. (Applause.) 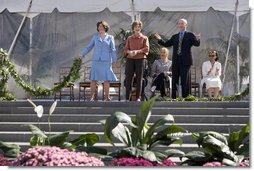 And here in the crowd, I see B.A. Bentsen and Mary Johnston. B.A., the wife of the late Texas Senator Lloyd Bentsen, and Mary Johnston, the wife of former Louisiana Senator Bennett Johnson. Mary planted the seeds of this garden in the early 1980s, when she worked with the American Rose Society and members of Congress to establish a national flower.

Her efforts paid off when President Reagan proclaimed the rose America's National Floral Emblem in 1986. But Mary and B.A. quickly realized that the Capitol needed a venue to showcase our country's newest symbol. While their husbands were in the Senate together, Mary and B.A. dreamed of building this garden as a place where Americans could contemplate and enjoy nature.

B.A. -- and Texas, and our country -- lost Senator Bentsen just this May. He was admired and treasured by the families he represented -- including mine -- because of his dedication to his state, his country, and his family. Today, Senator Bentsen would be proud to see Mary and B.A.'s dream come true.

America's National Garden represents years of hard work on the part of Mary and B.A., Leone and the National Fund, members of Congress and the Committee on the Library, and the staff and the directors of the U.S. Botanic Gardens. Because of their perseverance, on Sunday, this lovely space will open to the public -- and millions of Americans can experience the treasures of the National Garden.

The new Rose Garden features dozens of varieties of our National Floral Emblem. The Lawn Terrace is a magnificent example of landscape design. The Butterfly Garden showcases these fascinating creatures and their role in maintaining North America's plant communities. The Regional Garden -- which doubles as an outdoor classroom and living laboratory -- displays plant life native to the mid-Atlantic area, and will help teach children and adults the importance of preserving our country's spectacular natural resources. 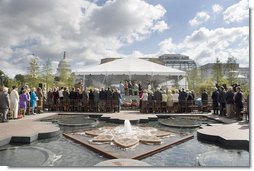 And the space we're looking at right now -- the First Ladies' Water Garden -- pays tribute to some of America's most extraordinary women. The garden bears the influence of First Ladies past: Its granite design is based on the classic colonial "Martha Washington" quilt pattern. And the seven living first ladies serve as honorary board members of the National Fund. These are all women I admire -- women like my mother, Barbara Bush, and Lady Bird Johnson, whose love of flowers and nature is legendary in Texas and throughout our country. I'm honored to represent these women here today.

America's National Garden would be a tremendous gift to the U.S. Botanic Gardens, the Capitol, this city, and our country no matter who built it. But what makes this gift so special is that it's been given by private citizens to the American public. The garden is funded entirely through private contributions, from a variety of donors -- from individual philanthropists, to major corporations, to the 230,000 members of America's National Garden Clubs, who raised hundreds of thousands of dollars for this project.

America's National Garden is a tribute to our country's First Ladies, a beautiful addition to the Washington landscape, and a symbol of our country's civic spirit. I'm proud to be here to help open it.

Thanks to each and every one of you for inviting me here, and for your commitment to beautifying our Capitol and our country.