For Immediate Release
Office of the Press Secretary
September 29, 2006

PRESIDENT BUSH: Mr. President, thank you for coming. It's been my honor to welcome the President of Kazakhstan back to the Oval Office. He informed me that the first time he was here was when my dad was the President. And I welcome you back.

We've just had a very important and interesting discussion. We discussed our desire to defeat extremism and our mutual desire to support the forces of moderation throughout the world. I thanked the President for his contribution to helping a new democracy in Iraq survive and thrive and grow. 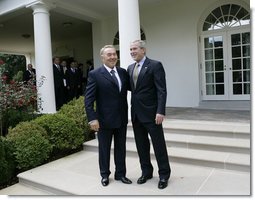 I have watched very carefully the development of this important country from one that was in the Soviet sphere to one that now is a free nation. And I appreciate your leadership, Mr. President. And I welcome you here to the White House, and I'm looking forward to buying you lunch. (Laughter.)

PRESIDENT NAZARBAYEV: (As translated) Thank you very much, Mr. President, for hospitality and for warm feelings that I feel in this country and for the invitation. This is the third time that I'm in the Oval room since the independence of our country and as I am the President of Kazakhstan. And Kazakh nation never had experienced statehood before, and I had this blessing of becoming the first President of Kazakhstan, and the United States was the country that supported our independence and recognized it from the very first days. Thus in economics, in energy partnership, in policy, in war on terrorism, we've truly become close partners.

And Kazakhstan today is very proud that we have the highest rate of economic growth in the world, and a lot of countries learn from the experience of Kazakhstan today. But that wouldn't be possible if Taliban would not be defeated in Afghanistan. And that war was led by United States. And nobody in Central Asia will feel safe and peace if we'd be surrounded by countries populated with terrorist people, and if we'd be surrounded by countries where some people crave to put their hands on the nuclear weapons, which Kazakhstan renounced in the past voluntarily, and thus contributed significantly to global security.

The United States is the major investor -- foreign investor into Kazakhstan. One-third of all foreign investments in Kazakhstan are from United States. And after this meeting, we'll publish the joint declaration, and you will -- in that declaration, you will read about the details and what we have discussed and what we have achieved during these negotiations.

And I'm here today to tell once again that Kazakhstan is a friend of the United States because the United States is the country that guaranteed stability and protection of Kazakhstan when Kazakhstan renounced nuclear weapons, and we will continue to work in all fields of our cooperation that exist today. 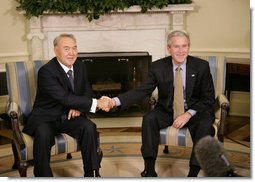