For Immediate Release
Office of the Press Secretary
September 28, 2006 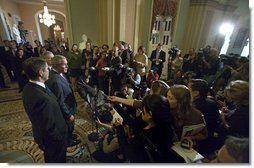 In speaking to the Senate, I urged them to get this legislation to my desk as soon as possible. Senator Frist and Senator McConnell committed to that end. The American people need to know we're working together to win this war on terror. Our most important responsibility is to protect the American people from further attack. And we cannot be able to tell the American people we're doing our full job unless we have the tools necessary to do so. And this legislation passed in the House yesterday is a part of making sure that we do have the capacity to protect you.

Our most solemn job is the security of this country. People shouldn't forget there's still an enemy out there that wants to do harm to the United States. And therefore a lot of my discussion with the members of the Senate was to remind them of this solemn responsibility. And so I look forward to you passing good legislation, Senators. Thank you for having me. Appreciate your time.