For Immediate Release
Office of the Press Secretary
September 26, 2006

THE PRESIDENT: Please be seated -- except for you all. (Laughter.) Welcome. Every April, Americans sit down and fill out their tax returns, and they find out how much of their hard-earned money is coming here to Washington. Once the tax dollars arrive here, most Americans have little idea of where the money goes. And today, our government is taking steps to change that. We believe that the more we inform our American citizens, the better our government will be. 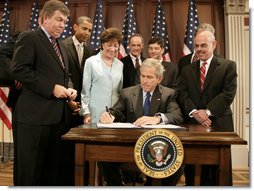 And so in a few moments, I'll sign the Federal Funding Accountability and Transparency Act of 2006. This bill is going to create a website that will list the federal government's grants and contracts. It's going to be a website that the average citizen can access and use. It will allow Americans to log onto the Internet just to see how your money is being spent. This bill will increase accountability and reduce incentives for wasteful spending. I am proud to sign it into law and I am proud to be with members of both political parties who worked hard to get this bill to my desk.

This has been a good effort by concerned members of the House and the Senate to say to the American people, we want to earn your trust; when we spend your money, we want you to be able to watch us.

I want to thank Rob Portman, who is in my Cabinet, he's the Director of the OMB, and my good friend, Clay Johnson, is the Deputy Director, for insisting on accountability when it comes to taxpayers' money. I know this has been a particular project -- a fond project of Clay, and I'm glad that members of Congress got it here.

I want to thank Susan Collins, who is the Chairman of the Homeland Security and Governmental Affairs Committee. I want to thank the bill sponsors, Tom Coburn from Oklahoma, Tom Carper from Delaware, and Barack Obama from Illinois.

I appreciate Roy Blunt, who is the Majority Whip. He's a sponsor of the House companion bill. I also want to thank Tom Davis, who is the Chairman of the Government Reform Committee, as well as cosponsors of the bill, Jeb Hensarling and Randy Kuhl.

You know, we spend a lot of time and a lot of effort collecting your money, and we should show the same amount of effort in reporting how we spend it. Every year, the federal government issues more than $400 billion in grants, and more than $300 billion in contracts to corporations, associations, and state and local governments. Taxpayers have a right to know where that money is going, and you have a right to know whether or not you're getting value for your money.

Under Clay's leadership, we launched a new system for measuring how federal programs are doing. In other words, federal programs say, we want to achieve this result, we're trying to figure out whether or not they're meeting the results. In other words, it makes sense for all of us in Washington, D.C. to say, we're a results-oriented government. I know Henry Waxman believes that. (Laughter.) Thank you for coming. Proud you're here, sir. I was just praising the bipartisan support that this bill has received, and you're confirmation of that bipartisan support. (Laughter.) Thank you, appreciate you coming. 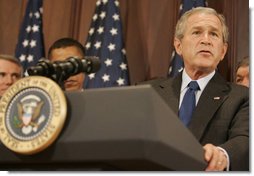 And so we've got -- we're measuring, and we put a -- we put a website out called ExpectMore.gov. In other words, people can go on to that website and determine whether or not the results are being met for programs.

And now Congress has come forth with an additional sense of accountability here in Washington, additional way for taxpayers to figure out whether or not we're being wise with your money. And the Federal Funding Accountability Act -- Accountability and Transparency Act will create a new website that will list government grants and contracts greater than $25,000. We'll list all grants except for those above $25,000, except for those that must remain classified for national security reasons.

The website will allow our citizens to go online, type in the name of any company, association, or state or locality and find out exactly what grants and contracts they've been awarded. It will allow citizens to call up the name and location of entities receiving federal funds, and will provide them with the purpose of the funding, the amount of money provided, the agency providing the funding and other relevant information.

By allowing Americans to Google their tax dollars, this new law will help taxpayers demand greater fiscal discipline. In other words, we're arming our fellow citizens with the information that will enable them to demand we do a better job -- a better job in the executive branch and better job in the legislative branch.

Information on earmarks will no longer be hidden deep in the pages of a federal budget bill, but just a few clicks away. This legislation will give the American people a new tool to hold their government accountable for spending decisions. When those decisions are made in broad daylight, they will be wiser and they will be more restrained. This is a good piece of legislation, and I congratulate the members here.

Recently the House made an important rule change that will also improve transparency in the legislative process. Under the rule change, the sponsor of each project will now be disclosed before the bills come to a vote. This is a wise change. It will shine the light on earmarks. It's going to help the American taxpayers know whether or not they're getting their money's worth here in Washington.

Rule change, along with the bill I'll sign today, are important steps, but there's more to be done. The President needs a line-item veto. Here's the problem: I get a big bill, an important bill to my desk, and in that bill there may be some bad spending items, some kind of last minute cram-ins, or items that may not have seen the full light of day during the legislative process. I then either have to accept those, or veto a good bill. And there's a better way forward, at least the House thought there was a better way forward in the legislative process, and that's the line-item veto.

Under the proposal, the President can approve spending that is necessary, red-line spending that is not, and send the wasteful and unnecessary spending back to the Congress for an up or down vote. I think this is an important part of making sure we have accountability here in Washington, D.C.

Right now, however, I have the honor of signing this new bill. It's a bill that empowers the American taxpayer, the American citizen. And we believe that the more transparency there is in the system, the better the system functions on behalf of the American people.

Again, I thank the members. It's my honor now to sign the Federal Funding Accountability and Transparency Act of 2006. (Applause.)

THE PRESIDENT: Thank you. (Applause.)