For Immediate Release
Office of the First Lady
September 25, 2006

MRS. BUSH: Welcome, everyone, to the White House. We have a very interesting and fun event this morning, I think, a great idea that Ambassador Karen Hughes is promoting. And Karen is the Undersecretary of State for Public Diplomacy and Public Affairs at the Department of State. Karen, thanks so much for joining us today. 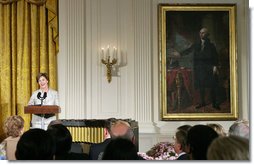 Many of you might have visited the great Festival of Chinese Art that was at the Kennedy Center last year. He's already been mentoring arts programs with on-line chats, to arts programs around the world, private arts programs that are wondering how to train their board members or how to raise money or all the things that arts groups do around the world. And so Michael, thank you very, very much for what you've already done and what I know you'll continue to do.

Dana Gioia, the Chairman of the National Endowment for the Arts, who also has been working both here and internationally to make sure the word gets out about American literature and American arts. And thank you very much for the great job you do, Dana.

Bruce Cole is here. He's the Chairman of the National Endowment for the Humanities. Jack Valenti is the founding trustee of the American Film Institute. Anne Radice is the Director of the Institute of Museum and Library Services. And I understand -- but I don't see -- oh, there he is, Mayor Anthony Williams has joined us. Thank you very much, Mayor.

Friends, artists, members of Congress, Ambassadors, and distinguished guests, thank you all very much for coming today. We're here today to help strengthen the ties between the United States and other countries. And one of the best ways we can deepen our friendships with the people of all countries is for us to better understand each other's cultures, by enjoying each other's literature, music, films and visual arts. 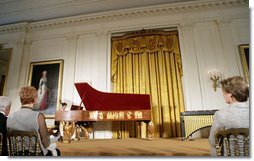 We saw art diplomacy during the Cold War, when even as the Soviet Union and the United States were on the brink of conflict, the people of these two countries found a common interest in jazz. Behind the Iron Curtain, Willis Conover, the Voice of America disk jockey, who announced "Music USA Jazz Hour" each week, was a hero to Soviet citizens. His broadcasts are said to have done more to improve U.S.-Soviet relations than any official negotiations could.

Today, art has the same power to reduce tensions and to strengthen alliances. Last week, I joined the First Lady of Pakistan, Sehba Musharraf, to launch the Gift of the Indus website, an online initiative sponsored by the Kennedy Center and the Pakistan Council of the Arts. Gift of the Indus will bring to the United States and Pakistan, two countries already allied in the international effort to secure peace, closer together by helping Americans discover the richness and the diversity of the arts in Pakistan.

Through the Global Cultural Initiative, and with the support of the State Department, private arts institutions will join our country's federal cultural agencies to make these art exchange programs an important part of America's diplomatic efforts. They'll also develop new outreach projects. The National Endowment for the Arts, for example, will establish the International Literary Exchanges among the United States, Russia, Mexico, Pakistan, and other countries.

The American Film Institute will bring foreign films and film makers to its AFI Fest in Los Angeles this November, and send American film makers overseas. And the National Endowment for the Humanities will expand its Landmarks of America workshops so that teachers from abroad can visit U.S. historical sites to learn about the events and the people that shaped American history.

These educators will be able to teach children in their countries about American literature after having spent a week at Mark Twain's Hartford home, or tell their students about the American immigrant experience after visiting New York City and Ellis Island.

I'd like to thank our federal partners, thank each and every one of you very much, and the private sector for participating in this initiative, for helping Americans learn more about the cultures of other nations, and for working to represent our country abroad through the arts.

To tell you more about cultural diplomacy and the Global Cultural Initiative, I'd like to introduce someone who's both an arts enthusiast and a terrific representative of our country: Ladies and gentlemen, Ambassador Karen Hughes. (Applause.)