For Immediate Release
Office of the First Lady
September 21, 2006

MRS. BUSH: Thank you, Senator McCain. Thank you for your service to our country and for the important work you're doing through the International Republican Institute.

I want to recognize Ellen Johnson-Sirleaf, the President of Liberia. I'm so thrilled to be here with you tonight. (Applause.) 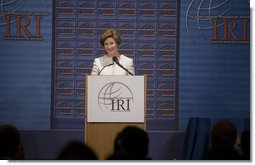 Mr. Peter Madigan, the IRI Vice Chairman, and Mr. Lorne Craner, the IRI President -- and, of course, as the President calls him, Big Ed Whitacre from Texas, the Chairman of the dinner -- thank you very much, Ed and Linda, for the great work you've done on tonight's dinner. (Applause.)

Ambassadors, members of Congress, and distinguished guests, I'm honored to be with you tonight and to receive this year's IRI Freedom Award. Thank you all very much.

For two decades, the International Republican Institute has worked with the people of many nations to help develop the democratic institutions upon which good governments are built. Through youth education initiatives, IRI trains the next generation of democratic leaders. By strengthening political parties and civic organizations, IRI helps societies foster debate and the free exchange of ideas. And through the Women's Democracy Network, IRI brings together women leaders from around the world so they can help more women participate in the political process. I'd like to thank the Institute for this important work.

Tonight I'm honored to receive IRI's Freedom Award with one of the world's most distinguished women leaders -- Liberia's President, Ellen Johnson-Sirleaf. (Applause.) President Johnson-Sirleaf is a respected economist, an accomplished public servant, and an amazing woman. Through her service as a Liberian cabinet minister in the 1970s, as a senior U.N. administrator in the 1990s, and now as her country's President, President Johnson-Sirleaf has always been deeply devoted to her country. Her dedication to Liberia has never diminished -- not even in the face of persecution.

When she opposed the military rule of Samuel Doe, President Johnson-Sirleaf was imprisoned, and eventually had to flee her country. Yet during all her years in exile, she never lost her love of freedom and her commitment to restoring democracy in Liberia. 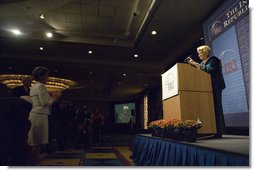 Now the United States stands with President Johnson-Sirleaf and the people of Liberia as they rebuild their country, and I encourage the IRI to dedicate your time, energy and resources to the rebuilding of Liberia. (Applause.)

President Johnson-Sirleaf is where she is today because of her hard work, her faith in democracy, and her belief in the power of education. She's a role model for women and girls everywhere, and she's an inspiration to everyone who believes in free societies.

President Johnson-Sirleaf, I'm delighted to be here with you this evening. To receive this award with you is such an honor.

Thank you to IRI for honoring President Johnson-Sirleaf and me, and thank you for your terrific work to promote democracy and freedom.