For Immediate Release
Office of the First Lady
September 20, 2006

MRS. BUSH: Thank you, President Clinton, for your very kind introduction. I'm delighted to be a part of this year's Clinton Global Initiative. Thank you for inviting me, and thank you for the terrific development work you're doing through your foundation.

This week, leaders from around the world have gathered in New York to advance goals shared by people in every country: economic empowerment, education, and good health. 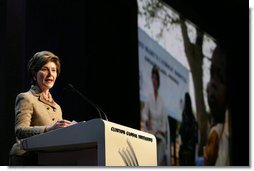 The eagerness of children to learn, the desire of individuals to provide for themselves and their families, and the longing of mothers to see their babies grow up healthy and strong are universal. Yet poverty, a lack of education, and pandemic diseases have kept millions around the world -- especially in the developing world -- from fulfilling these fundamental desires.

But thanks to the initiative of governments and the people in the developing world, men and women of many nations are creating sustainable solutions to poverty, lack of education, and pandemic disease. The American people are proud to stand with them.

President Clinton, I thought that your audience today might want to hear a few of the things the American people are doing through their government to support international development. Because of partnerships between developed countries and nations in the developing world, there's now a great optimism that the advantages enjoyed by so many in the developed world can be enjoyed by people everywhere.

These partnerships are addressing poverty. Since 2001, America's support for international development has doubled, and support for Africa has more than tripled. Last year, at the G8 in Gleneagles, the United States and other nations worked to secure up to $60 billion in debt relief to the world's poorest countries. The U.S. pledged to double assistance to sub-Saharan Africa by 2010.

Even more important is building free economies, which yield long-term prosperity. In 2002, our country launched the Millennium Challenge Account -- a $5 billion initiative that encourages governments to become more transparent, to invest in their people, and to foster economic freedom.

Through partnerships between the United States and the developing world, we're addressing a lack of education. Just this year, the American people have provided more than half a billion dollars to support educational initiatives abroad.

We're supporting initiatives like the Women's Teacher Training Institute in Kabul, which was established through a partnership between the government of Afghanistan and USAID. At the Institute, women from the provinces have a safe dorm to stay in while they're trained to be teachers. Then they can go home and train more teachers in a cascading effect, with the purpose of opening and staffing as many new schools as possible. 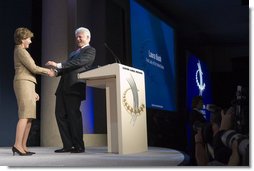 And in Ghana, I visited the Accra Teacher Training College, which participates in the Textbooks and Learning Materials Program. As part of the program, six American universities have partnered with six African countries to produce and distribute 15 million primary-school textbooks for African students. The program is part of our country's African Education Initiative, a $600 million commitment that's already helped train more than 400,000 teachers in sub-Saharan Africa.

Through partnerships between the United States and the developing world, we're addressing pandemic disease. The challenges posed by illnesses like malaria, tuberculosis, and HIV/AIDS are significant. In Africa, malaria kills 3,000 children every day, and this largely preventable disease claims 1.2 million lives a year. But last year, our country launched the President's Malaria Initiative -- a five-year, $1.2 billion program that joins the government and private sector to combat malaria in 15 of the hardest-hit countries.

By the end of this month, through partnerships with the first three focus countries, aid from the American people will already have reached about six million Africans. And in December, the President and I will host a White House Summit on Malaria to help build on the President's Malaria Initiative's success.

HIV/AIDS is one of the greatest humanitarian challenges of our time. Around the world, nearly 40 million people are affected. Just a few years ago, many believed that the AIDS crisis could never be overcome. In 2003, our country launched the President's Emergency Plan for AIDS Relief, a five-year, $15 billion initiative to combat AIDS in 120 countries around the world.

The Emergency Plan works in partnership with the hardest-hit countries, and that partnership is saving lives. When the United States first launched PEPFAR, it was believed that only 50,000 people in sub-Saharan Africa were thought to be receiving antiretroviral treatment. Now, in PEPFAR's 15 focus nations, our country has helped more than half a million people get treatment. These people are learning to live with HIV -- instead of waiting to die from it. 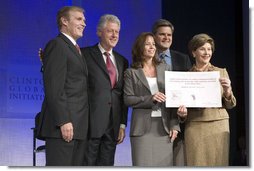 In South Africa, I visited the Mothers-to-Mothers Program, which is funded with PEPFAR seed money. At "Mothers" centers, HIV-infected pregnant women receive information and support to keep their unborn children HIV-free.

"Mothers" also empowers women with education, so that they and their children can stay healthy. Mothers who've successfully delivered HIV-negative babies mentor other mothers. The program encourages mothers to go to school. And "Mothers" helps women discover their artistic talents through beading and crafts, and to use their skills to provide for themselves and their children.

Earlier this year, "Mothers" partnered with the Venice Arts Council to provide women with photography lessons and camera equipment -- encouraging the women to tell their stories of survival through art. Today, the photos are on display in the Venice Art Walk in Los Angeles, and future displays are planned for Stanford, Harvard, and the United Nations. One of the women, Caroline, is planning a photo book to document her life as an HIV-positive mother in a South African township.

Before she came to the Mothers-to-Mothers program, Caroline was a struggling single mother living in a shack. Today, Caroline's little boy is healthy, and she's an internationally exhibited artist, confident in her future.

Through programs like Mothers-to-Mothers, HIV-positive people are finding a new sense of hope and purpose. The founder of the Mothers Program, Dr. Mitch Besser, says this hope makes all the difference. When people know that HIV is not a death sentence, they're more likely to seek testing and treatment. They share their status with their family members, helping to break the stigma of HIV. "The hallmark of our program," Dr. Besser says, "is living positively."

In the developing world, millions are now living positively. Today I'm pleased to announce that the United States government is partnering with the Case Foundation, the MCJ Foundation, and other organizations to help address one of the greatest health crises in Africa today: the lack of clean water.

Around the world, more than a billion people do not have safe water to drink, or to use to keep themselves and their homes clean. A child dies every 15 seconds from illnesses related to unsafe water. Without clean water, people suffering from HIV and AIDS can't take their antiretroviral medicines safely and easily, and their weakened immune systems are exposed to dangerous water-borne diseases.

Unsafe water is also an obstacle to education. Water-related illnesses keep children out of school, and keep children from learning while they're in school. Finding clean drinking water is the central daily task of women and girls in many parts of Africa -- a task that keeps girls out of the classroom.

The public-private partnership we're announcing today will be known as the PlayPumps Alliance. PlayPumps are children's merry-go-rounds attached to a water pump and a storage tank. When the wheel turns, clean drinking water is produced. PlayPumps are fueled by a limitless energy source: children at play.

We invite other partners to join this Alliance to install 4,000 pumps in schools and communities, and provide clean drinking water to as many as 10 million sub-Saharan Africans by 2010. (Applause.)

The U.S. Government, through USAID and PEPFAR, is committing $10 million toward a goal of $60 million. And I thank Steve and Jean Case for their generosity, and for their work to raise additional contributions.

Nthabiseng Lamona, one of the women who participated in the Mothers-to-Mothers photography project, summed up her life's goals this way: "I want my kids to have a warm shelter, a bright future, a good education -- and my family to accept me. I want to own a house, to be independent, and to have a good job so I can raise my children."

These are desires written in the heart of every human being, of every race, religion, income level, and nationality. And through the generosity of governments, and contributions from the private sector, and the leadership of the governments of developing nations, we can succeed in helping people everywhere build a healthier, more prosperous, and more hopeful world for their children.

Thank you, President Clinton, for inviting me today. Thanks to your foundation for the important work you do. And thanks to each and every one of you here, each one of you, for your commitment to the people of our world.