For Immediate Release
Office of the First Lady
September 18, 2006

MRS. BUSH: My friends who are here and I had the honor and the pleasure of closing the New York Stock Exchange. The people who are behind me were part of a Global Conference on Literacy that I hosted earlier this morning with UNESCO, which is the U.N. agency that's charged with education, at the New York Public Library, which was the perfect site to have a conference on literacy. 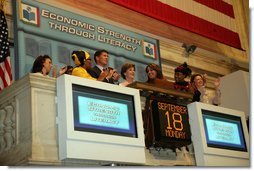 The last panel of the conference was that literacy is economic empowerment, that it's so important for countries to have an educated workforce. It's important for individuals to be literate, to be successful, and be able to support their families.

So I want to thank the people from around the world who are with me: Gloria from South Africa; Koumba from Burkina Faso; Mrs. Esteves from Brazil; Dr. Rao from India; Tooba Mayel from Afghanistan; Gerri Elliott, who is an American from Microsoft is here with us; and, of course, the President of the New York Stock Exchange, John Thain.

So we had a really great day today talking with world leaders who are in town because of the United Nations General Assembly -- education ministers, spouses of world leaders who came this morning to discuss what we can do worldwide to make sure that men and women and children learn how to read.

UNESCO is focusing on the 34 countries that have the highest illiteracy rate. There are about 800 million illiterate people in the world, and almost 85 percent of those people are from 34 countries. So UNESCO is working specifically with the governments of those countries.

But every country has people who are illiterate. And because they are, they can't partake in their economy, in their political life, even in a way to get good health care for themselves. If you can't read a medicine bottle or read any health news, then you're at a disadvantage.

So thank you all, thanks so much. It was really fun to get to be up there to ring the bell. We had a terrific time. I appreciated everybody. 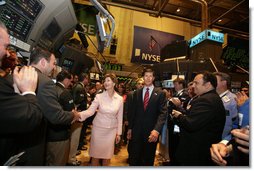