For Immediate Release
Office of the Vice President
September 11, 2006

THE VICE PRESIDENT: Mr. Secretary, General Pace, distinguished guests, ladies and gentlemen: Five years ago, September 11th forever ceased to be an ordinary date on the calendar. So we gather, once again, to recall events that still have the power to move us, and always will. And we honor the men, women, and children whose lives were taken, so suddenly and so coldly, here at the Pentagon, at the World Trade Center, and on a field in Pennsylvania. We remember all that we saw, and heard, and felt on that Tuesday morning, and also how much the world changed on the 11th of September, 2001. 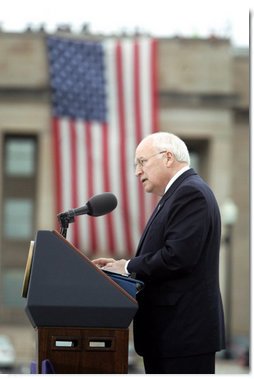 The ones who were lost had begun that day just as you and I did -- as free citizens of a peaceful country. They were busy with life. They had people who cared about them, people who depended on them, people who loved the sight of their face and the sound of their voice. They were unsuspecting of danger and undeserving of their fate. Each one of them had hopes and plans for the future. All of that was taken away by the wicked plans of a few men.

I will always remember leaving the White House after nightfall on September 11th. From a helicopter along the Potomac, we saw the scene of the crash, the lights pointed at the Pentagon, and the smoke that had been rising since early that morning.

What happened here at 9:37 a.m. on September 11th challenges anyone's powers of description. Perhaps no one expressed it better than an Army lieutenant colonel who was here that morning attempting to rescue others. It was all, as he put it, so "cheap, dirty and senseless."

When the alert was sounded at the Pentagon, this space was filled with emergency vehicles, and a combat air patrol circled overhead. Inside, civilian and military personnel were helping each other through the smoke and the darkness. On Route 27, a priest hurried from his car to give comfort to the wounded and to pray with them. From two miles away, an Army chief warrant officer, whose wife worked in this building, saw the fire and ran to the scene. He joined in the rescue effort, and stayed in the work even after learning his wife could not possibly have survived.

We know of these and so many similar acts of courage and kindness on that terrible morning. Other stories, we will never know. Surely men and women here, and aboard Flight 77, were in their last moments holding and comforting one another. And when we think of them, it will always be with a special feeling of empathy and sorrow. We will always understand the pain of their families. And our nation will forever look with reverence upon their place -- this place where their lives ended.

On September 11th, Americans also had a glimpse of the culture of the Pentagon -- and we saw a great deal to make us proud. Suddenly our nation was at war, and the switch to a war footing here was immediate. A witness said, "My most vivid memory of that day is this sea of khaki Navy uniforms -- doing what we were trained to do: Fight the fire, find your shipmates." Everyone seemed to rush forward to help. Minutes after the attack, Marines had organized a watch outside. The Secretary of Defense himself helped carry out the wounded. Within hours, the first meeting was held to review military options. When that giant flag was unfurled here, it rallied the country. And everyone was reminded how fortunate we are every day to have the men and women of the Pentagon on duty for the United States of America.

In these five years, we have needed you as much as we ever have. And since that day there is a lot we've learned. We have learned that oceans do not protect us, and threats that gather thousands of miles away can now find us here at home. We have learned that there is a certain kind of enemy whose ambitions have no limits, and whose cruelty is only fed by the grief of others.

And in these years, we also found our mission: to defend America against a present danger, and to offer a democracy and hope as the alternative to extremism and terror. As President Bush has said, "This nation has defeated tyrants and liberated death camps, raised the lamp of liberty to every captive land. We have no intention of ignoring or appeasing history's latest gang of fanatics trying to murder their way to power."

The war on terror has placed hard duties on our military and on the Department of Defense. You have done all our country has asked of you, and more. And you know better than most that much hard work and sacrifice still lay ahead. Yet in the conduct of this war the world has seen the best that is in our country. We have shown that Americans are a resolute people -- clear in our purposes, steady in difficult tasks. We have answered violence with patient justice. We have liberated whole nations from dictatorship, stayed beside them on the path to democracy, and lifted the sights of millions to a future beyond tyranny and terror. This struggle is fierce, and it will be lengthy. But it is not endless. Our cause is right, our will is strong, this great nation will prevail.

At every turn in this battle for our freedom and security, Americans will persevere with courage, and with honor. We will never forget the day the war began, or the way the war began. Our thoughts remain with the victims of 9/11. Our prayers remain with the families left behind. May they find comfort in the deep respect and compassion of their fellow citizens. And may God watch over the United States of America.