For Immediate Release
Office of the First Lady
September 9, 2006 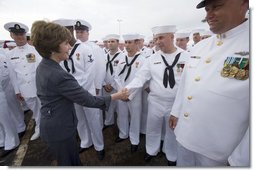 My respect for the crew of Texas has grown so profoundly because of that time since I had this opportunity to be First Lady of Texas -- of the United States -- and to get to know them.

Texas embodies the best ideals of her namesake's state: endurance, courage, loyalty and quiet strength. And nowhere are these virtues more visible than in her crew.

For years, you've prepared this boat and yourselves to protect our nation on the seas. Today, at long last, she and you are ready.

Wherever she sails, I know Texas will build on the proud legacy of her predecessors. Less than an hour north of here, visitors to the San Jacinta Battleground State Historic Site can explore the second U.S.S. Texas. More than 60 years ago, the young men of her crew -- men like you -- bombarded Omaha Beach and Pointe Du Hoc during the D-Day landings. They were supporting the young men -- men like you -- who scaled sheer cliffs and charged into Nazi gunfire to reclaim a continent for liberty.

Texas later sustained damage during her Atlantic service, but German guns couldn't stop her. She was repaired and made her way to the Pacific where she bombarded enemy defenses in Iwo Jima and Okinawa to make way for American soldiers and Marines -- men like you -- to defeat an enemy that had attack America unprovoked.

The crew of the Battleship Texas were men like you, because in the face of tremendous danger, they put aside their greatest fears to take up the cause of freedom. Like you, they were driven by their determination to protect the United States of America, and by their deep love of liberty.

You serve on Texas at a time when our country once again faces a threat to America's homeland, and a global threat to freedom. Like those who came before you, the crew of this new vessel will make our country proud.

You're eager to serve and to serve well. I've just presided over the re-enlistment of four of your fellow sailors -- men who have committed themselves to the Navy until our mission is complete. And I've just presented two submariners with their Dolphins. Dolphins represent the years of training and hard work and the commitment to excellence required to mastering the workings of this sub. A Dolphin shows that its bearer has the trust of his captain and his fellow sailors to take care of the boat and those who sail on her. 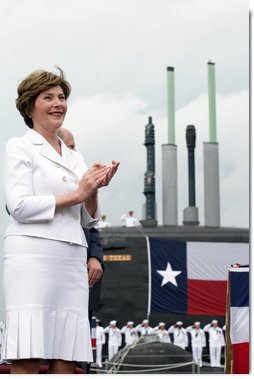 Texas will keep that trust, will carry on the proud legacy of her past, and will write her own distinguished chapter in history.

May God bless America, the crew of U.S.S. Texas, and all those who serve beneath the deep. Thank you, and Godspeed. (Applause.)

Officers and crew of United States Ship Texas man our ship and bring it to life.