For Immediate Release
Office of the Press Secretary
September 5, 2006

THE PRESIDENT: Good afternoon and welcome to the White House. I'm pleased to announce that I intend to nominate Mary Peters to be the next Secretary of Transportation. 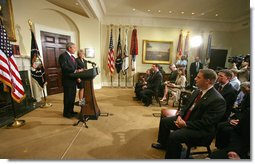 Mary Peters is the right person for this job. She brings a lifetime of experience on transportation issues, from both the private and public sectors. She now serves as a senior executive for transportation policy at a major engineering firm. Before that, Mary served in my administration as the head of the Federal Highway Administration. As administrator, Mary led efforts to improve safety and security, reduce traffic congestion and modernize America's roads and bridges.

And before coming to Washington, Mary served in the Arizona Department of Transportation for more than 15 years, rising through the ranks to become the director in 1998. Mary has a reputation for character and common sense. She's an innovative thinker. She knows how to set priorities and to solve problems. And as a member of my Cabinet, Mary will work closely with state and local leaders to ensure that America has a state of the art transportation system that meets the needs of our growing economy.

When confirmed by the Senate, Mary will succeed one of our nation's finest Secretaries of Transportation in Norm Mineta. When I came to Washington, I asked Norm to continue his service by joining my Cabinet. And he shows that when we put politics aside, people from different political parties can work together to achieve results for the American people.

He was the Secretary of Transportation on September the 11th, 2001. And he led the unprecedented effort to bring tens of thousands of passengers aboard commercial aircraft to safe landings. And since then, he's worked to strengthen the security at America's airports and seaports. He's played a critical role in keeping America safe from terrorist attacks. Norm also worked hard to modernize the aviation market. And after Hurricane Katrina, Norm and his team swung into action to repair and reopen major highways and seaports and airports and pipelines along America's Gulf Coast. 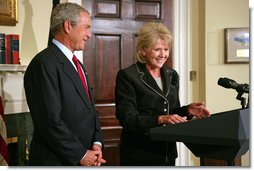 Norm Mineta has served America with integrity and dedication and distinction. He leaves office as the longest-serving Secretary of Transportation in our nation's history. I appreciate Norm's lifetime of service to our country. I wish him and Deni and all his family all the best. I also want to thank Maria Cino for her outstanding leadership of the Department since Norm stepped down in July.

Mary Peters knows the legacy she has to live up to at the Department of Transportation. She will take this new post during a time of historic challenges for our economy and our transportation system. I want to thank Mary for her willingness to serve yet again. She's going to make an outstanding Secretary of Transportation, and I call upon the United States Senate to confirm her promptly. Congratulations.

MS. PETERS: Mr. President, thank you so much. I feel a little bit like Ginger Rogers must have felt with Fred Astaire following Secretary Mineta. I think I'm going to be dancing backward in high heels a little bit.

Mr. President, thank you so much for the honor to serve you and to serve the American people as your nominee to be the next Secretary of Transportation.

As the President has so clearly recognized, our nation's transportation systems are essential to America's continued economic vitality and our ability as a nation to compete in a global economy, and, most importantly, to the quality of life of all Americans. Those systems have served our nation very well, but must rise to an even greater challenge in the future.

Today, our vital transportation infrastructure is showing signs of aging. We are experiencing increasing congestion on our nation's highways, railways, airports and seaports. And we're robbing our nation of productivity and our citizens of quality time with their families.

In some cases, this is the result of systems and structures that are more suited to a bygone era than to the 21st century. Should I be confirmed by the United States Senate, I look forward to working with you, Mr. President, with Congress, and with our public and private sector partners to address these issues and to provide our nation with a transportation system that is unparalleled in its security, in its safety, its efficiency, and its effectiveness.

Mr. President, I want to take this opportunity to thank my life's partner, my very best friend and my husband of 40 years, Terry, as well as my children, my family and friends for their continued love and support. Without them, I would not have this incredible opportunity to be standing here with you today, sir.

THE PRESIDENT: Good job. Thank you, all.