For Immediate Release
Office of the Press Secretary
September 4, 2006

THE PRESIDENT: Thank you all. Please be seated. Happy Labor Day.

THE PRESIDENT: Yes, thanks. Listen, I'm thrilled that Michael invited me to come and visit with you this Labor Day. But this isn't the first time he invited me. (Laughter.) He invited me for last year, and I committed. And then we had a terrible storm hit, and I hope you understood -- understand why I needed to be there than up here last year. 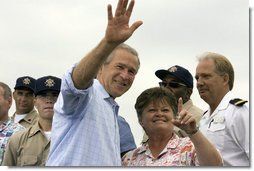 Now he invited me again. I couldn't wait to say yes, and couldn't wait to come here. I must confess, Michael, I didn't realize how strong your facility -- facilities are here. I wasn't sure what to expect, but this is a fantastic facility. It speaks to your leadership, and the leadership and the importance of your union. And so, here on Labor Day, I say to the union members who are here, happy Labor Day, and thanks for supporting leadership that is progressive, smart, capable, and has your best interests at heart. (Applause.)

I'm proud to be here with the family members. Michael, thanks for inviting family members. As you know, I think family is an important part of life, and that -- invite the family here -- families here today was a smart thing to do. I look forward to shaking as many hands as I can this morning.

Today, on Labor Day, we honor those who work, and we honor those who work because, in so doing, we recognize that one of the reasons why we're the economic leader in the world is because of our work force. And the fundamental question facing the country is, how do we continue to be the economic leader in the world? What do we do to make sure that, when people look around the world next year, and 10 years from now, they say, the United States is still the most powerful economy in the world? I think that's an important goal to have, because when we're the most powerful economy in the world, it means our people benefit. It means there's job opportunities. That's what we want. We want people working. We want people to realize their dreams.

And so the best thing to do is to keep pro-growth economic policies in place as the first step to making sure we're the most powerful economy in the world. And I think that means keeping those taxes low, letting you keep more of your own money. See, when you have more money in your pocket, you get to spend the money. You get to make the decisions. And the fundamental question facing government is, who best to spend your money, you, or the government? I believe you ought to do it. (Applause.)

So we ought to make the tax relief permanent. I like it when people are working for a living, have more after-tax money in their pocket. That's what I like. And I think that ought to be a policy of the United States government. So to make sure that we're the economic leader of the world, we got to keep taxes low. 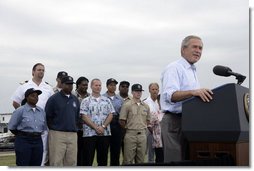 But we also got to do some other things that's smart, and it starts with making sure our workers have the skills necessary to compete in the 21st century. And that's one of the primary reasons I came to this facility.

Now, I just happened to be over here at the training building, and they put me behind the wheel of a Coast Guard cutter in Baltimore Harbor, and they made the boat rock a little bit. (Laughter.) And I got slightly discombobulated. (Laughter.) It's one of the most amazing training tools I have ever seen. But it shows this union's commitment, along with industry's commitment, to making sure that those who pilot the boats, those who are engineers on the boats, have the absolute best training possible. See, as we constantly -- as the world constantly changes, we better make sure that our work force has the skills necessary to compete if we want to be the world's leading economy.

And so I applaud the Seafarers Union, and I applaud the employers working together to make sure that those who work for a living have what it takes to be competitive. And we got to make sure that's the case throughout all the work force, and we got to make sure that our community colleges are accessible to people who need to gain new skills of the 21st century. See, as the work force stays productive -- in other words, if you keep getting a good education, it increases your standard of living, but also helps this country remain strong economically.

A couple of other things we need to do, as well. We got to do something about energy, in order to make sure that we're competitive, that this economy will remain strong, that people are able to find work. By the way, the unemployment rate is 4.7 percent. That's a good sign for somebody looking for a job. It means people are working here in the United States. (Applause.)

But one things is clear, is that dependence on foreign oil jeopardizes our capacity to grow. I mean, the problem is we get oil from some parts of the world and they simply don't like us. And so the more dependent we are on that type of energy, the less likely it will be that we are able to compete, and so people have good, high-paying jobs.

And so I've got a plan to work with -- to spend money on technologies. See, the technological development here at this school has been dramatic. Well, we can achieve the same technological breakthroughs when it comes to energy. And that starts with how we drive our automobiles. You know, one of these days, you're going to have a -- batteries in your automobile that will enable you to drive the first 40 miles without gasoline, and your car doesn't have to look like a golf cart. (Laughter.) I mean, I bet the people down in this part of the world like to drive pickups, Mike. (Laughter.) But we're going to have a battery that makes those pickups go. 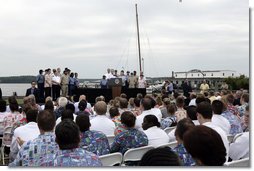 And the reason why is, is that we're spending money to develop new technologies to enable us to become less dependent on oil. And that makes sense. And so, in order to think about how we remain competitive as a nation, we've got to be aggressive in promoting new technologies, particularly on the energy front.

You know, in the Midwest, a lot of people are beginning to fuel their cars with more and more ethanol. Ethanol is derived from corn, so you've got to get out there growing corn; the corn goes into an ethanol plant and out comes fuel to drive the car. That seems to make a lot of sense to me to say, in order to become less dependent on foreign oil why don't we become more reliant upon America's farmers to produce energy for our automobiles? And that's the kind of things we're doing. (Applause.)

And finally, one of the ways to make sure that we're a competitive nation is to continue opening up markets for U.S. products. If I was somebody who was driving a ship, or an engineer on a ship, I'd want to hear a President say, we want you to be selling U.S. products -- transporting U.S. products around the world. See, we got 5 percent of the world's people here in the United States, which means 95 percent are potential customers. And therefore, it's important for us to be aggressive about opening up markets.

And my message to the world is this: Just treat us the way we treat you. That's all we expect. We just want the rules to be fair -- because I believe this country can compete with anybody, any time, anywhere, so long as the rules are fair. (Applause.) So Mike asked me to come and talk about ways to make sure we're competitive. He said, what you going to do, Mr. President? There you are, things are going okay now, but what about five years from now, what will the world look like? And I hope here are some good ideas for you to think about, about how to make sure that the United States is competitive.

I can't help but look at a man over there in uniform and think about our military right now on Labor Day. First, thank you for serving. (Applause.) And our soldiers and sailors and Coast Guard men and Marines and Air Force have got to understand this -- that this country supports them in the mission; that they may hear all the political discourse going on, but the people of this country, the people of the United States of America stand squarely behind the men and women who wear our uniform. (Applause.)

And so I want to thank you for greeting me. I look forward to coming to say hello to you. I appreciate you taking time out of your day to say hi. I know you're a little disappointed that Laura didn't come. (Laughter.) You probably wish she'd have come and I stayed at home. (Laughter.) But she sends her greetings. God bless you all, and may God continue to bless the United States of America. (Applause.)