For Immediate Release
Office of the Press Secretary
August 28, 2006

Fact Sheet: A New Mississippi: Rebuilding in the Wake of Hurricane Katrina

Obviously, part of the problem is getting housing. That's why we're working with Governor Barbour to make sure that the housing money starts moving. But people are going to have to -- they're coming down to work, they're going to have to have a place to live. But what's fascinating about this part of the world is that in one year's time it's gone from despair to hope, and that if you're somebody who wants to find a job, you can find work in Mississippi, good-paying jobs. That's what the man just told me who runs the company. There is hope down here. There's still a lot of work to be done. 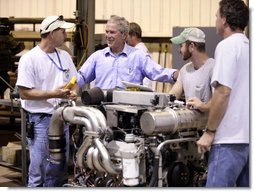 My message to the people down here is that we understand there's more work to be done, and just because a year has passed, the federal government will remember the people. This is an anniversary, but it doesn't mean it ends. It's the beginning of what is going to be a long recovery. But I'm amazed by the opportunity, I'm amazed by the hope that I feel down here. Anyway, thought you would be interested.

THE PRESIDENT: The role of government here, first and foremost, is to provide enough money to say that the rebuilding effort will be robust. I felt it was very important for us to be generous, and the people of America responded. The people in the Gulf Coast region have got to understand the American taxpayers have stepped forth with a lot of money. And you can't have hope unless there's a reason to be hopeful, and the $110 billion was a reason to be hopeful.

Obviously, there's a lot of work to be done, but the federal government had a very important role to play and we're playing it. But so does the state and local government, whether it be here in Mississippi or in Louisiana. The citizens of our country and the citizens of this region have an important role to play, because this storm was so big it requires all aspects of American life to help the people. It was a massive storm. It was the largest in the nation's history, or at least the most expensive.

Q How long do you imagine it will be before this area is fully rebuilt?

THE PRESIDENT: Well, it's hard for me to say. I would say years, not months. On the other hand, the progress in one year's time has been remarkable. And I suspect that what you'll see, Toby, is there will be a momentum, momentum will be gathered. Houses will begat jobs, jobs will begat houses. And they're just beginning to get to that point where the infrastructures are being expanded, the houses are going to be -- more houses are going to be added.

The Governor was talking to me today about an interesting modular concept to expedite people getting out of trailers into something more permanent. But the storm was massive in scope. You came down with me and saw it. But most Americans didn't get to see what it was like. It's hard to describe, the devastation down here. It was massive in its destruction, and it spared nobody. United States Senator Trent Lott had a fantastic house overlooking the bay. I know because I sat in it with he and his wife. And now it's completely obliterated. There's nothing. And I remember coming down here -- these giant piles of debris were here.

People say, how can we rebuild with debris? Now it's gone. But to answer your question, I can't predict, but I do know how massive the effort is going to be, and I know how massive it's been. There's just more work to be done. The people down here need to know the federal government is helping and we understand that there are still issues and people are still hurting, and people want to get into their homes.

Q Sir, is $110 billion the end of it? And which promises from Jackson Square are you finding hardest to make a reality?

THE PRESIDENT: -- $110 billion, hopefully that will work. Hopefully, that's enough. It's certainly enough to get us through the next period of time. And the hardest part has been to get a state reconstruction effort up and running. Mississippi's is up and running. Of course, I said early on that the states and local governments have got to devise a plan to rebuild. And the reason I said that is because the people of Mississippi know best how to rebuild Mississippi, and the Governor stepped up and he put this fantastic commission together and they developed a plan. That plan has been funded. The money is beginning to go out the door, so people can rebuild their lives.

In Louisiana it's been a little slower. And I look forward to talking to the folks there tomorrow and this evening about what we can do to work together to expedite these plans being implemented, because we funded the housing and I think when people begin to see the checks that come -- that say, okay, here's some money to help you rebuild, they'll have a lot better spirit. They'll feel a lot better about their future.

Anyway, thank you all.