For Immediate Release
Office of the Press Secretary
August 18, 2006

THE PRESIDENT: Thank you all for coming. We've just finished a really informative meeting with my economic team. I want to thank them for their service to the country. I'm really proud to be serving the American people alongside them. I've put together a really good team of people; smart, capable, decent, honorable people who are serving America with great distinction.

We discussed the state of the economy. We discussed where our economy is headed. And we discussed the steps that we're going to take to ensure that our economy continues to lead the world. The foundation of our economy is solid, and it's strong. Because of the tax cuts we passed, American workers and families and small businesses are keeping more of the money they earn. And they're using that money to drive this economy of ours forward.

The economy grew at 4 percent annual rate during the first half of 2006, and this means that our economy is maintaining solid growth, and performing in line with expectations. Our solid economic growth is creating real benefits for American workers and families and entrepreneurs. Since August 2003, we've added more than 5.5 million new jobs. The unemployment rate is 4.8 percent. Productivity growth is strong. Behind the numbers are stories of hard-working Americans who are realizing their dreams. The entrepreneurial spirit in this country is strong, and that's good for America.

You know, in Miami a couple of weeks ago, and I met a fellow named Nelson Gonzalez. Ten years ago he and a friend started a computer business in a garage with $10,000. Their revenues are $192 million today. They employ about 750 people around the world.

I visited a fellow in Wisconsin named John West. He runs a manufacturing company. Over the past two years, John's factory has expanded from 65 employees to 90 employees. He told me he's receiving more orders than he can fill, and he's looking for more workers.

The other day I went to York, Pennsylvania, to visit the Harley-Davidson plant. They're selling motorcycles all over the world. Harley has doubled its work force in the past decade. In other words, things are good for American workers and good for the entrepreneurs, and that's good for the country.

The economic growth has had a positive impact on the budget, and that's good for the taxpayers. Last year, economic growth pushed up federal tax revenues by 14.5 percent -- it's the largest increase in 24 years. This year, tax revenues are projected to increase by another 11.4 percent, and at the same time, we are working with Congress to restrain federal spending. We're meeting our priorities and we're restraining federal spending.

We recently learned that this year's deficit is projected to be 30 percent lower than we initially thought, and that means we're on track to cut the deficit in half by 2008, a full year ahead of the original goal. We've got to keep this economy growing through pro-growth economic policies. Taxes need to be kept low.

We're working with Congress to restrain spending. Congress needs to pass the line-item veto, so we can work together to cut out wasteful and unnecessary spending. We're going to work to make sure health care is more affordable for our businesses and our families. We will continue to invest in new energy technologies so we can promote alternative sources of energy and be wise stewards with the environment. We'll continue to work to stop the spread of junk lawsuits, and we'll continue to open up markets for American products.

We also discussed ways to keep this economy of ours competitive, flexible, and dynamic into the future. We discussed ways to make sure we improve education and job training. It's really important for our workers to have the skills necessary so we can remain a competitive country. It's really important for Congress to fully fund the American Competitiveness Initiative to make sure this country remains the economic leader we want it to be.

And we also talked about the need for this administration to work with Congress to really deal with the biggest challenge facing our budget, and a huge challenge for our economic growth in the future, and that is the unsustainable growth of spending on programs like Social Security, Medicare and Medicaid.

These programs need to be reformed so that they will be available for our children and our grandchildren. It's a difficult issue, I know, for members of Congress. The people here with me clearly see the problem, and we look forward to working with both Republicans and Democrats to do our duty, and that's to solve the problem.

All of us here are confident about the future of this country. Over the past five years, our economy has faced unprecedented challenges from recession to corporate scandal to terrorist attack to natural disasters. And through it all, our free-enterprise system has proved to be the most resilient and responsive in the world.

With hard work and wise policies, we'll meet every challenge that comes. And in so doing, we'll help more Americans realize their dreams and continue to make this country a grand -- a land of great opportunities. 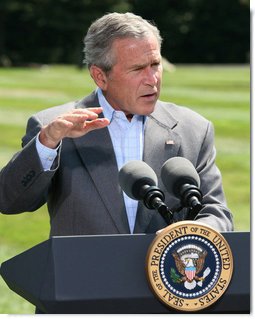 And now I'll answer a couple of questions. Deb, you got any?

Q Mr. President, on Lebanon, how can you say that Hezbollah has suffered such a bad defeat when it's rebuilding -- helping rebuild in southern Lebanon, and it remains intact? And secondly, are you disappointed at all about France's decision to scale back its support of the international force?

THE PRESIDENT: I think when people take a sober look at what took place in Lebanon, they'll realize that the destruction was caused by Hezbollah. Hezbollah caused the crisis. It was Hezbollah's kidnapping of Israeli soldiers, as well as Hezbollah's launching rockets that caused Israel to defend herself from an action that the Lebanese government didn't support.

Hezbollah acted as a government within a government. And the world came to that recognition very quickly. I remember -- I don't know if you traveled to St. Petersburg with us, but one of the first things that happened in the G8 after this crisis occurred was that we all sat around the table and came to the conclusion very quickly this type of behavior from a state within a state is intolerable for peace.

The first reaction, of course, of Hezbollah and its supporters is, declare victory. I guess I would have done the same thing if I were them. But sometimes it takes people a while to come to the sober realization of what forces create stability and which don't. Hezbollah is a force of instability. I appreciate the Siniora's government's efforts to make it clear to the Lebanese people that they are the legitimate government of Lebanon and they will work to rebuild that country. Prime Minister Siniora gave a very -- I thought a very interesting speech the other night, and a powerful speech, about how it's now time for the duly elected government of Lebanon to do its duty and help rebuild. And they're getting help from around the international community to do so.

Other part of your -- oh, the peacekeepers. Diplomacy takes a while, as you know. You watched the unfolding of the U.N. resolution necessary to get a ceasefire in the first place -- it took a while. And we will continue to work with friends and allies to make it clear to them now is the time to address the root causes of the problem, and that's being Hezbollah's state within a state, particularly in southern Lebanon. And we'll work with nations to step up to the plate and do what they voted to do at the United Nations, and that is to provide robust international forces to help the Lebanese army retake the south.

Hezbollah, they're pretty comfortable there in south Lebanon. They're now going to find themselves not only that which caused the destruction, but they'll find themselves with now a Lebanese army, with U.N. help, making it clear they won't have the safe haven necessary -- that they think is necessary to launch attacks.

The issue is broader than just Hezbollah. The issue is also Syria and Iran, two nations that supported Hezbollah in its attempts to create enough havoc so that -- I guess people feel like they could take political advantage of the situation, we just can't let them do it.

Q But what about France, though?

President Chirac has made it very clear that he believes that democracy in Lebanon is very important, been supportive of the Siniora government like we had. France and the United States cosponsored 1559. That's the U.N. resolution that was the beginning of the end of Syria's involvement in -- or Syria's occupation in Lebanon. So we have common interests with France, and they are a very important part of the international scene and will be a very important player in Lebanon.

Q Mr. President, are there indications that North Korea is preparing to conduct its first nuclear bomb test? And if that were to occur, how would the United States respond?

THE PRESIDENT: Well, it's a hypothetical question, and you're asking me to divulge any intelligence information I have, and I'm not going to do that, as you know. I'm not going to break tradition.

If North Korea were to conduct a test, it's just a constant reminder for people in the neighborhood, in particular, that North Korea poses a threat. And we expect there to be -- we expect our friends and those sitting around the table with us to act in such a manner as to help rid the world of the threat.

Q Mr. President, the federal ruling yesterday that declared your terrorist surveillance program unconstitutional -- the judge wrote that it was never the intent of the framers to give the President such unfettered control. How do you respond, sir, to opponents who say that this ruling is really the first nail in the coffin of your administration's legal strategy in the war on terror?

THE PRESIDENT: I would say that those who herald this decision simply do not understand the nature of the world in which we live. You might remember last week working with the -- with people in Great Britain, we disrupted a plot. People were trying to come and kill people.

This country of ours is at war, and we must give those whose responsibility it is to protect the United States the tools necessary to protect this country in a time of war. The judge's decision was a -- I strongly disagree with that decision, strongly disagree. That's why I instructed the Justice Department to appeal immediately, and I believe our appeals will be upheld.

I made my position clear about this war on terror. And by the way, the enemy made their position clear yet again when we were able to stop them. And I -- the American people expect us to protect them, and therefore I put this program in place. We believe -- strongly believe it's constitutional.