For Immediate Release
Office of the Press Secretary
August 17, 2006

THE PRESIDENT: Thank you. Please be seated. Thanks. Welcome to the White House. We're glad you're here. In a few moments, I will have the honor of signing the most sweeping reform of America's pension laws in over 30 years, the Pension Protection Act of 2006. And we welcome you here to witness the signing.

Americans who spend a lifetime working hard should be confident that their pensions will be there when they retire. Last year I asked Congress to strengthen protections for the pensions of our workers. Members of both parties came together to pass a good bill that will improve our pension system, while expanding opportunities for Americans to build their own nest-eggs for retirement. And I'm really pleased to sign this bill into law. 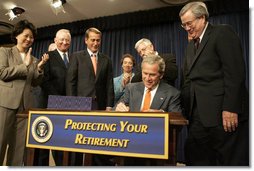 I want to thank two members of my -- three members of my Cabinet who have joined us today: Secretary of Treasury Hank Paulson, Secretary of Labor Elaine Chao, and the Director of the OMB Rob Portman. As an aside, while Portman served in Congress he was the principal author of some of the important provisions of this bill.

I also want to welcome members of the United States Senate and the House of Representatives here. I welcome Senator Mike Enzi, who is the Chairman of the Health, Education, Labor, and Pensions Committee. I welcome Senator Blanche Lincoln from Arkansas. I welcome Congressman John Boehner, House Majority Leader, who was instrumental in getting this bill passed; along with Buck McKeon, who's the Chairman of the Education and Workforce Committee; Congressman Bill Thomas, Chairman of the Ways and Means Committee; Congressman John Kline of Minnesota. Thank you all for coming. Thanks for coming back from your vacations. (Applause.)

Many Americans work for private companies that offer traditional pensions, and most of those companies are meeting their obligations to their employees and their retirees. Yet, some businesses are not putting away the cash they need to fund the pensions they promised to their workers. These companies get into financial trouble and go bankrupt, their underfunded pension plans can leave some retirees with checks much smaller than the ones they were promised.

The federal government has created an insurance system for businesses offering private pensions, and that insurance is funded by premiums collected from these employers. When some businesses fail to fund their pension plans and are unable to meet their obligations to their employees, it puts a strain on the entire system.

And if there's not enough money in the system to cover all the extra costs, American taxpayers could be called on to make up the shortfall. Every American has an interest in seeing this system fixed, whether you're a worker at a company with an underfunded pension, or a taxpayer who might get stuck with the bill.

The Pension Protection Act of 2006 will help shore up our pension insurance system in several key ways. It requires companies who underfund their pension plans to pay additional premiums. It extends the requirement that companies that terminate their pensions must provide extra funding for the system. This legislation insists that companies measure their obligations of their pension plans more accurately. It closes loopholes that allow underfunded plans to skip pension payments. It raises caps on the amount that employers can put into their pension plans so they can add more money during good times and build up a cushion that can keep pensions solvent in lean times.

Finally, this legislation prevents companies with underfunded pension plans from digging the hole deeper by promising extra benefits to their workers without paying for those promises up front. The problem of underfunded pensions will not be eliminated overnight. This bill establishes sound standards for pension funding, yet, in the end, the primary responsibility rests with employers to fund the pension promises as soon as they can.

The message from this administration, from those of us up here today, is this: You should keep the promises you make to your workers. If you offer a private pension plan to your employees, you have a duty to set aside enough money now so your workers will get what they've been promised when they retire.

In addition to reforming the laws governing traditional private pensions, the bill I signed today also contains provisions to help workers who save for retirement through defined contribution plans like IRAs and 401(k)s. These savings plans are helping Americans build a society of ownership and financial independence.

And this legislation will make it easier for workers to participate in these plans. It will remove barriers that prevent companies from automatically enrolling their employees in these savings plans, ensure that workers have more information about the performance of their accounts, provide greater access to professional advice about investing safely for retirement, and give workers greater control over how their accounts are invested.

Finally, this bill makes permanent the higher contribution limits for IRAs and 401(k)s that we passed in 2001, and that will enable more workers to build larger nest eggs for retirement.

To ensure more secure retirement for all Americans we've got more work to do. We must also prepare for the impact of the baby boomer generation's retirement, and what that impact will have on federal entitlement programs like Social Security and Medicare. As more baby boomers stop contributing payroll taxes and start collecting benefits -- people like me -- it will create an enormous strain on our programs. Entitlement programs are projected to grow faster than the economy, faster than the population and faster than the rate of inflation. If we fail to act, spending on Social Security and Medicare and Medicaid will be almost 60 percent of the entire federal budget in the year 2030. And that's going to leave future generations with impossible choices: staggering tax increases, immense deficits or deep cuts in benefits.

Today, we've taken an important step toward ensuring greater retirement security for millions of American workers. I want to thank the House and the Senate for their good work on this vital legislation. It's been hard work. It took a lot of pages to write that bill, as you can see. (Laughter.) But the members did good work, and now I'd ask them to join me as I sign into law the Pension Protection Act of 2006. (Applause.)