For Immediate Release
Office of the Press Secretary
August 15, 2006

THE PRESIDENT: It's been my honor to be here at the NCTC. A couple of observations: One, that of the work being done here by some really fine Americans because from different agencies in our government, America is safer than it has been. But it's not yet safe. The enemy has got an advantage when it comes to attacking our homeland - they've got to be right one time, and we've got to be right a hundred percent of the time to protect the American people. 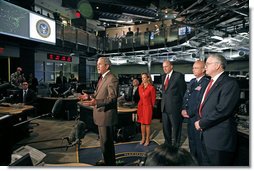 I'm proud to report that there's a lot of good folks that are working hard to see to it that we're right a hundred percent of the time. And I want to thank all the people in this building and around our government who spend an incredible amount of time and energy and effort to do a very difficult job, and that's to protect the American people.

Recently we saw the fruits of their labor in conjunction with their counterparts in Great Britain. Because of the good work in Great Britain and because of the help of the people there at NCTC, we disrupted a terror plot, a plot where people were willing to kill innocent life to achieve political objectives. And that plot is -- and this building and the work going on here really is indicative of the challenge we face, not only this week, but this year and the years to come, because the United States of America is engaged in a war against a extremist group of folks bound together by an ideology, willing to use terror to achieve their objectives.

Our most solemn duty in the federal government is to protect the American people, and I will assure the American people that we're doing everything in our power to protect you. And we've got some good assets, and the best asset we have is the people, people represented right here in this building.

So I've come to listen and learn and to look at reforms that have been put in place. And I've also come to thank the good people who work here and elsewhere in our government for doing what they are doing.