For Immediate Release
Office of the Press Secretary
August 14, 2006

H.R. 5683, which provides for the Federal acquisition of the Mt. Soledad Veterans Memorial in San Diego, California. 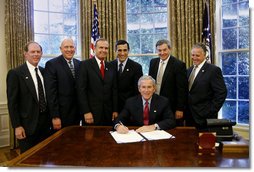 On Saturday, August 12, 2006, the President signed the following bills into law:

S. 3693, which amends the Violence Against Women and Department of Justice Reauthorization Act of 2005.