For Immediate Release
Office of the First Lady
August 4, 2006

MRS. BUSH: Thank you, Jordan, and thank you for your very nice introduction, and for being such a terrific example for young people all across our country. Lieutenant Governor Norton, thank you very much for being here, and Dr. Robert Coombe, the Chancellor of the University of Denver, thank you so much for letting us have this conference here in your beautiful facility. 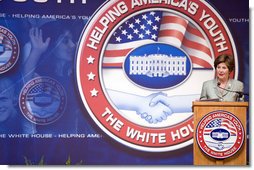 I'm delighted to be with so many distinguished community leaders for our Second Regional Conference on Helping America's Youth. The first conference, as many of you may know, was in Washington last October, and then we had a conference in Indianapolis. And now Denver is the host of our second regional conference.

The work that each one of you do in your communities, helping young people build the knowledge and the self-respect they need to lead successful lives, is at the heart of Helping America's Youth. President Bush, in his 2005 State of the Union address, announced the Helping America's Youth Initiative, and he asked me to lead it.

So over the last year and a half, I've traveled around our country, visiting with young people, and with the adults who are so important to their lives. I've been to schools and to after-school programs. I've met with mentors and Big Brothers and Big Sisters. I visited a sports program in Detroit, a debate program in Atlanta, and gang intervention programs in Los Angeles and Chicago.

All of these visits led to the White House Conference on Helping America's Youth last October. At the conference, more than 500 researchers, civic leaders, educators and parents met to identify the challenges facing America's youth, and determine what programs are best able to help young people overcome those challenges.

Today you've heard from some of the speakers from that conference, and I've heard many of the speakers who have spoken to you earlier today. And you're hearing how all of these people who represent all different programs and groups are making a difference in the lives of young people.

At the conference, we introduced an online, interactive Community Guide, which many of you learned about yesterday. The guide helps concerned adults learn more about their own communities, like which neighborhoods have the most youth-related problems, and what local resources are available to address those problems. The Community Guide is available on the Helping America's Youth website at www.helpingamericasyouth.gov -- that's g-o-v. The site features statistics about America's young people, news about upcoming conferences, and live and archived webcasts. In fact, this gives me a chance to say hello to the groups in Nebraska, New Mexico and Utah who are meeting today to watch this conference live via the website. 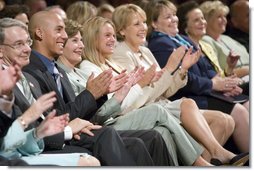 Also on the website, you'll find more information about the initiative, and then the Community Guide. So I encourage you to visit the Helping America's Youth website, and to use these resources in your own communities.

Today's conference, and other regional conferences to follow, will build on the White House event. Through the regional conferences, we're trying to make Helping America's Youth more local so we can learn directly from community leaders about the unique challenges facing young people.

These challenges are far greater today than they were for children just a generation ago. Drugs and gangs, predators on the Internet, violence on television and in real life are just some of the negative influences present everywhere today. And as children face these dangers, they often face them with fewer people to turn to for help. More children are raised in single parent families, most often without a father. Millions of children have one or both parents in prison. Many boys and girls spend more time alone or with their own peers than they do with any members of their family. And at this crucial time in our nation's history, we're also concerned about the children of our men and women in uniform.

Across America, almost 190,000 children have one or both of their parents deployed overseas. Six thousand of these children live right here in Colorado. Military kids are resourceful and resilient, but the demands of military life -- frequent moves and school transitions, long-distance parenting, parents reentering family life after the trauma of combat, not to mention the stress of knowing that Mom or Dad is in harm's way -- present unique difficulties for our troops and their children.

Military families give so much to our communities and our country, and Americans have the obligation to help them in every way that we can.

Nearby in the city of Fountain, Colorado -- just down the road from the Army's Fort Carson base -- supporting military families is a daily part of community life. At Fountain-Fort Carson High School, 40 percent of the students have at least one parent on active duty. Fortunately, for every student grappling with a parent's deployment, there are even more members of the Fountain-Fort Carson High School community standing with them, offering love and support. 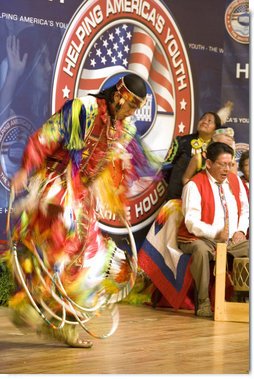 Sometimes that help involves making an extra effort to keep parents in touch with their children. When military parents are about to be deployed, the dean of students, Mitch Johnson, explains, "They'll come to me and they'll say, 'Please take care of my son or daughter. Remember, I'm only an email away.'" So school staff members will often attend parent-teacher conferences in a deployed parent's stead, and then send the parent email updates about his child's academic progress.

Mitch also coaches Fountain-Fort Carson's football team, and he tells of one player's father who had never missed a single one of his son's football games until he was deployed to Iraq during his son's senior year of high school and final football season. Other parents and staff members taped his son's games and sent the DVDs to his dad in Iraq.

Mitch also remembers how one of his players, Andre Faulkner, the son of a single military mother, struggled when his mom was deployed to Afghanistan. Keeping his mom close to his heart, even as she was thousands of miles away, Andre always wore her spare set of dog tags. Touched by Andre's love for his mother, a Fort Carson middle-school teacher, Rose Terrell, opened her heart and her home, welcoming Andre into her family until his mom returned. It's a practice Mitch says is common among Fountain-Fort Carson families.

Whether through informal acts of love like those in Fort Carson, or through formal military support programs like the ones we'll hear about later today, efforts to help military kids are vital to the success of Helping America's Youth. As our troops risk their lives around the world to keep our children safe, they shouldn't have to worry about their own children here at home. So thanks to everyone who's helping our military families for your important work.

The difficulties confronted by our military kids are among many great challenges facing America's young people. But greater still is our love for children, our hope for them, and the dedication of millions of Americans to helping young people succeed.

And in order to make sure every child is surrounded by these positive influences, even more adults must dedicate themselves to helping America's youth. More adults need to care, to be aware of the challenges facing children, and to take an interest in their lives, because when adults believe in children, children learn to believe in themselves.

I've seen the importance of caring adults. In Omaha, I visited Father Flanagan's Boys and Girls Town. At Father Flanagan's, young people struggling with family problems or delinquency live in a nurturing environment where they learn the self-respect and the self-control they need to lead happy, productive lives. After my visit, I got a lot of letters from the kids I met at Father Flanagan's, and they were a joy to read, and not just because of the nice things the children had to say about me, like one little girl who wrote, "You're the most important First Lady I've met in my entire life." (Laughter.)

What really moved me was that in letter after letter, the children told me how happy they were to know that somebody cared. I can remember a letter from Brittney, who wrote, "You helped me realize that there are people who truly care." She added that the encouragement of caring adults at Father Flanagan's inspired her to care for others and to run for mayor of Girls and Boys Town.

Adults, and especially parents, also need to connect with their children to establish relationships in which they can teach kids healthy behaviors by their own good examples.

I've seen the importance of these relationships. In Milwaukee, at Rosalie Manor Community and Family Services Center, men participate in the "Today's Dads" program, which helps teenagers and young men become responsible, nurturing fathers. At Rosalie I met Jason, who joined "Today's Dads" when he was 16. Without a dad in his own life, Jason became involved with drugs and dropped out of school. When his girlfriend became pregnant, a friend of Jason's mother referred him to the program.

At Rosalie, Jason was paired with a mentor, Alphonso, who helped Jason understand his responsibilities as a parent, and provided the fatherly advice Jason missed from his own dad. Alphonso remembers how once Jason got into an argument with his girlfriend, and he wanted to know how to make her stop being mad at him. Alphonso shared with Jason the profound wisdom about relations between the sexes. He said, "I told him to buy her a card and a flower." It worked. (Laughter.)

Over the last two years, with Alphonso's guidance, Jason has worked to support his son, and he's completing his GED. Jason is involved in his son's life, and he's determined to be an involved and stable father to his children.

Adults must also make sustained commitments to children -- commitments of our time and our energy -- because young people are much more likely to invest in their own future when they know that someone else is invested with them.

I've seen the importance of committed adults. You saw this on the video, but in Los Angeles, I visited Homeboy Industries. The program was founded by Father Gregory Boyle, a priest who, as he said, had buried too many young people killed by gang violence. At Homeboy Industries, youth receive counseling and training, and even free tattoo removal, to help them leave gangs behind. Most important, Homeboy Industries provides job training for young people so that they can become employed. As Father Boyle said to me, he said, "Laura, I know it's not this simple, but it's jobs." Through employment, young people learn the respect that comes from working every day, and they learn that respect comes not from belonging to a gang, but from earning an honest living for themselves and their families.

When adults offer young people a chance, their love and support can show struggling youth the hope that can lie in their future. And sometimes that hope makes all the difference. As Father Boyle said, "I never knew a hopeful kid who joined a gang."

As you've heard throughout these discussions, and will continue to hear this afternoon, young people want us in their lives, and they need us in their lives. And as I've learned from the remarkable men and women I've met across our country, each one of us has the power to help America's youth.