For Immediate Release
Office of the Press Secretary
August 2, 2006

THE PRESIDENT: I have just been briefed by the Emergency Management teams of Lake County and the other counties affected by the recent flooding. Law enforcement was there, fire fighters were there, and our FEMA representative was there at the briefing.

A couple of impressions: One, the local response was really good. The interoperability between various jurisdictions was superb. And as a result, a lot of people's lives were saved. And I want to congratulate you, Sheriff, and congratulate Larry for your good work in helping people. 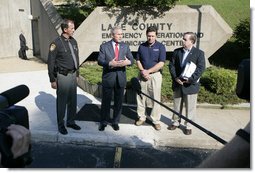 There are still assessments going on for further federal help and federal assistance, and when those assessments are made, the proper help will be granted. For those people who are wondering about the federal help, there's toll-free numbers. You can call the Emergency Center, they'll give you the toll-free numbers if you've been a citizen affected by these recent floods.

Again, I want to congratulate you all for a job well-done. I had the honor of talking to dispatchers, hardworking people that are on the phone all the time helping people. And now, once the lives have been saved, with the exception of one soul, that it's now time to help the people rebuild their lives. There's a lot of people concerned and a lot of people working here, and the federal government will do its part with the local authorities.

Thank you all very much. Appreciate you.