THE PRESIDENT: Thank you all for coming. Please be seated. Welcome and good afternoon. In a few moments I will sign the Adam Walsh Child Protection and Safety Act of 2006. Twenty-five years ago today, Adam Walsh was abducted from a department store and he was later found murdered. In the years since, his parents, John and Rev Walsh, have become advocates for missing children. They've helped combat child abduction and exploitation across this country. And the bill I sign today will strengthen federal laws to protect our children from sexual and other violent crimes, will help prevent child pornography, and will make the Internet safer for our sons and daughters. I want to thank you all for joining us today, and thank you for your tireless crusade. (Applause.) 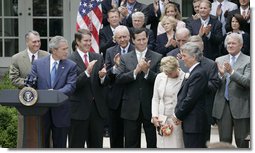 I'm pleased to be up here with the Attorney General, Al Gonzales. I want to thank all the members of the House and the Senate who have joined us. John, as you can see, you've attracted quite a crowd here.

I appreciate very much the bill sponsors who have joined us, and the committee chairmen and the leadership that has made this bill possible. This is a good piece of bipartisan legislation, and I'm really going to be proud to sign it.

I want to thank all the family members of victims who have joined us today. I particularly want to say hello to Elizabeth Smart and Amie Zyla. Thank you all for coming.

You know, having someone harm your child is one of the worst nightmares a parent could face. And the families who have joined us today have felt that pain firsthand. In your suffering and loss, many of you have found the courage to become advocates for the safety of other children. Because of your efforts, this important measure is going to become the law of the land, and the children of parents you may never meet will be spared the anguish your families have known. So thank you for your contribution.

Protecting our children is our solemn responsibility. It's what we must do. When a child's life or innocence is taken it is a terrible loss -- it's an act of unforgivable cruelty. Our society has a duty to protect our children from exploitation and danger. By enacting this law we're sending a clear message across the country: those who prey on our children will be caught, prosecuted and punished to the fullest extent of the law.

I appreciate working with Congress in the past to give law enforcement the tools they need to go after criminals who kidnap and exploit children. In 2003, I signed the PROTECT Act, that expanded the use of Amber Alerts, that makes grants to all 50 states so law enforcement can quickly alert the public about missing children and their abductors. We also launched Operation Predator to help law enforcement track down and arrest foreign pedophiles and human traffickers and sex tourists and Internet pornographers who prey on our children. 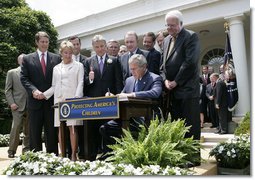 Earlier this year, the Department of Justice, led by Al Gonzales, launched Project Safe Childhood to help federal, state and local enforcement officials investigate and prosecute crimes against children that are facilitated by the Internet and other electronic communications.

This new law I sign today builds on the progress in four important ways: First, the bill I sign today will greatly expand the National Sex Offender Registry by integrating the information in state sex offender registry systems and ensuring that law enforcement has access to the same information across the United States. It seems to make sense, doesn't it? See, these improvements will help prevent sex offenders from evading detection by moving from one state to the next. Data drawn from this comprehensive registry will also be made available to the public so parents have the information they need to protect their children from sex offenders that might be in their neighborhoods.

Third, the bill I sign today will make it harder for sex predators to reach our children on the Internet. Some sex predators use this technology to make contact with potential victims, so the bill authorizes additional new regional Internet Crimes Against Children Task Forces. These task forces provides funding and training to help state and local law enforcement combat crimes involving the sexual exploitation of minors on the Internet.

Fourth, the bill I sign today will help prevent child abuse by creating a National Child Abuse Registry, and requiring investigators to do background checks on adoptive and foster parents before they approve to take custody of a child. By giving child protective service professionals in all 50 states access to this critical information, we will improve their ability to investigate child abuse cases and help ensure that the vulnerable children are not put into situations of abuse or neglect.

This is a comprehensive piece of legislation, and it's an important bill. Our nation grieves with every family that's suffered the unbearable pain of a child who's been abducted or abused. This law makes an important step forward in this country's efforts to protect those who cannot protect themselves.

I thank you for coming for witness to this. It's now my high honor to sign the Adam Walsh Child Protection and Safety Act of 2006. (Applause.)