PRESIDENT BUSH: The Prime Minister [sic] and I will take a couple of questions a side, after opening statements -- Mr. President, excuse me. Welcome.

PRESIDENT BUSH: The President and I are friends. Romania and the United States are friends, and we're allies. And as such, we've had an in-depth discussion about a variety of subjects. We talked about the international scene and how we can work together to promote democracy and peace. We talked about the neighborhood, and I assured him that the United States position on Moldova is that we support the territorial integrity of Moldova. 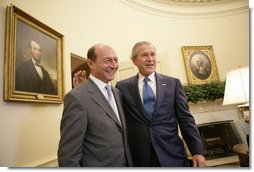 We talked about bilateral relations. One of, of course, the issues that's on the President's mind is the visa policy. He was very articulate and strong in his position that the United States must be forward leaning when it comes to granting visas to the citizens of Romania. I listened very carefully. I assured him that there is a way forward, there's a road map that we'd like to work with our friends and allies on and we will pay very careful attention to what the President said.

We've got a lot on our agenda because we're friends. I do want to thank the people of Romania for their strong support to the young democracy in Iraq and Afghanistan. And your contribution, Mr. President, has been worthwhile and meaningful and I know the Iraqi people are grateful, and so am I.

So welcome back to the Oval Office.

PRESIDENT BASESCU: Thank you very much, Mr. President. In fact, we meet each other after one year -- compare it with what we discussed last year, we conclude that both parties fulfilled assumed obligations. Romania will continue to remain an ally of the United States in supporting the democracy in Iraq and Afghanistan, in supporting democratic regimes in these countries like a key of freedom on the area.

At same time we conclude that we have to continue our cooperation in economical area, in political area and in security area. And at the same time, Romania will contribute with peace possibilities in spreading the democracy around Romania, mainly on the Black Sea (inaudible).

That's all in a few words. I thank you very much, Mr. President, for our discussion.

Q Thank you, sir. Israeli's Justice Minister said that the lack of a call from the international community for an immediate cease-fire essentially gives Israel a green light to push harder. And the top general there says there will be more several more weeks of fighting. Is your administration okay with these things? 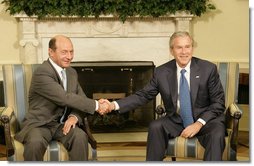 Hezbollah attacked Israel. I believe Hezbollah -- I know Hezbollah is connected to Iran. And now is the time for the world to confront this danger. We care deeply about the loss of life. And I'm troubled by the destruction that has taken place in Lebanon. You know, we grieve when Lebanese families lose innocent life. I've urged that there be caution when it comes to dealing with Hezbollah. On the other hand, I fully understand that whatever is done diplomatically must address the root cause. And the root cause is terrorist activities. One of the things I said initially when these incidents first started happening, was that it's important for the Lebanese democracy to survive and become strong.

And so what you're watching is American policy aiming to address the root cause and aiming to strengthen Lebanese democracy, so that we can have peace. I view this as a clash of forms of government. I see people who can't stand the thought of democracy taking hold in parts of -- in the Middle East. And as democracy begins to advance, they use terrorist tactics to stop it.

But our objective is to make sure those who use terrorist tactics are not rewarded, and at the same time, help those who have suffered as a result of the responses.

Q So several more weeks of fighting is okay to achieve those goals?

PRESIDENT BUSH: My goal is exactly what I said it was, and that is to hopefully end this as quickly as possible, and at the same time, making sure there's a lasting peace -- not a fake peace, not a fake, you know, kind of circumstances that make us all feel better, and then, sure enough, the problem arises again. And that's the goal of the United States. And we're working toward that end. And we're working hard diplomatically. Look, as soon as we can get this resolved the better, obviously, but it must be real. And it can't be fake. And so there's a serious diplomatic effort going forward, led ably by my Secretary of State.

Want to ask somebody from the Romanian press?

Q Is there any role for the Romanian -- for Romania in the American foreign policy strategy, besides its participation within the American-led coalitions in Iraq and Afghanistan?

PRESIDENT BUSH: Absolutely. I spent a lot of time listening to my friend's advice on the Black Sea region. We're going to spend time over lunch talking about specific issues related to the Balkans. And Romania's role in this area and in her neighborhood is a vital role, one that I listen very carefully to his advice on, because this area of the world is one where there's emerging democracies, and it's an area of the world that is where there has been historical conflict, and it's an area of the world where we've got to pay attention to it. And so the Romanian role is a vital role.

And so, as I say, we're going to spend time strategizing about the role over lunch.

Q Sir, thank you. Dr. Zawahiri has surfaced again with a new videotape urging Muslims to fight and become martyrs, because of the conflict in Lebanon. What's your reaction to that?

PRESIDENT BUSH: My answer is, I'm not surprised people who use terrorist tactics would start speaking out. It doesn't surprise me. I am -- Zawahiri's attitude about life is that there shouldn't be free societies. And he believes that people ought to use terrorist tactics, the killing of innocent people to achieve his objective. And so I'm not surprised he feels like he needs to lend his voice to terrorist activities that are trying to prevent democracies from moving forward.

Al Qaeda has made it clear about their vision for the future, and it's one that is exactly opposite to what the American people believe and the Romanian President believes, and that is people ought to be free -- free to worship, free to speak their minds, free to participate in the process.

And so, you know, here's a fellow who is in a remote region of the world putting out statements basically encouraging people to use terrorist tactics to kill innocent people to achieve political objectives. And the United States of America stands strong against Mr. Zawahiri and his types.

PRESIDENT BUSH: No, no. It's an interesting question you bring up, however. I told the President we're dealing with an immigration debate here in the United States and that I'm hopeful that we'll get a comprehensive immigration bill that will accommodate people who want to work here, but we want them to work here on a temporary basis and in a legal way.

No, the issue with the visa policy first started because of what was an overstay problem based upon a history of people traveling to the United States during a different era. In other words, a lot of people during the previous era -- that era would be one defined by a non-free society versus a free society -- would come to the United States on a temporary visa and then would overstay their visa. And we have laws on the books that say countries who have people come and overstay their visas, therefore, must be viewed differently than others.

Now, one of the first changes we have made is that we have said, okay, that's a bygone era, now let's look toward the future. Secondly, we've said to countries, we want to work together on a road map to make sure the visa policy will work. And that's where we are with Romania, as well as other countries. And so each country has to develop its own road map based upon its own particular circumstances.

And that's what we're doing, Mr. President. The answer is, as quickly as we can get these issues resolved, the better. But we've still got work to do.

PRESIDENT BASESCU: If you would allow me, Mr. President, mainly for the American journalists. Romanians don't look at the United States like immigration area. In fact, as a member of European Union, the Romanians have a lot of places to work around Romania.

The problem that we have now -- and for this reason I raised the subject of visas in discussions with the President -- is in connection with our students, which are more and more present in American universities, with our intelligent people which are working in IBM or in Oracle, with our business people -- and if you look at the volume of the business in the last three years, was three times increased. And now a businessperson from Romania, in order to obtain a visa coming in the United States discussing about developing the business, needs a minimum three months.

And, in fact, Romanians don't look at the United States like a place to immigrate illegally, or to find a working place. This problem was settled for Romanians in Europe. We already have the people spread around Europe, like Romania has people from Europe, from other countries which work in Romania. So Romania will not be illegal immigration problem, or a problem from the point of view of jobs, which exist for the United States.