For Immediate Release
Office of the Press Secretary
July 18, 2006

THE PRESIDENT: I just had the pleasure of briefing the key members of the House and the Senate on my trip to St. Petersburg and to Germany. Thank you all for coming.

You know, prior to my traveling to St. Petersburg, I thought the issue was going to be whether or not we could bring the world together to deal with North Korea and Iran -- and, by the way, during my stay there we did get an unanimous United Nations Security Council agreement on North Korea, and it was my pleasure to be able to thank the Chinese and the Russians and the Japanese and our European friends for voting favorably for that resolution -- but, instead, a lot of the discussion was on the Hezbollah attacks into Israel. 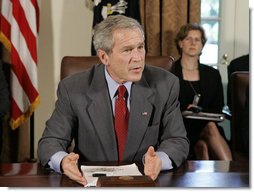 What was really interesting was that -- and I briefed this to the members -- that we were able to reach a very strong consensus that the world must confront the root causes of the current instability. And the root cause of that current instability is terrorism and terrorist attacks on a democratic country. And part of those terrorist attacks are inspired by nation states, like Syria and Iran. And in order to be able to deal with this crisis, the world must deal with Hezbollah, with Syria and to continue to work to isolate Iran.

I strongly believe every nation ought to be able to defend herself from terrorist attacks. We're also mindful -- and I talked to the members about -- the need to make sure the government of Lebanon does not collapse. It's in our interest that Lebanon be free and the Siniora government succeed.

We also talked about the evacuation of U.S. citizens in Lebanon. And Condi briefed the members about the joint plan with the Defense Department to make sure there's enough transportation to expeditiously provide transportation for those who want to leave. And we're in the process of doing that.

All in all, it was a very positive visit there at the G8. We dealt with significant problems. Sometimes it requires tragic situations to help bring clarity in the international community. And it is now clear for all to see that there are terrorist elements who want to destroy our democratic friends and allies, and the world must work to prevent them from doing so.

With that, I'll be glad to answer a couple of questions.

Q In trying to defuse the situation in the Middle East, is the United States trying to buy time and give Israel a chance to weaken Hezbollah militarily?

THE PRESIDENT: Well, we have made it very clear that Israel should be allowed to defend herself. We've asked that as she does so, that she be mindful of the Siniora government. It's very important that this government in Lebanon succeed and survive.

Everybody abhors the loss of innocent life. On the other hand, what we recognize is that the root cause of the problem is Hezbollah. And that problem must be addressed, and be addressed through -- internationally by making it clear to Syria that they've got to stop their support to Hezbollah. 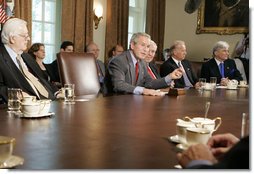 Listen, Syria is trying to get back into Lebanon, it looks like to me. We passed United Nations Resolution 1559, and finally this young democracy, or this democracy became whole, by getting Syria out. And there's suspicions that the instability created by the Hezbollian attacks will cause some in Lebanon to invite Syria back in, and it's against the United Nations policy and it's against U.S. policy.

THE PRESIDENT: I want the world to address the root causes of the problem, and the root cause of the problem is Hezbollah. I also -- and we've been, of course, in touch with Israel. Condi spoke to Prime Minister Olmert yesterday on the airplane flying back. And we're never going to tell a nation how to defend herself, but we are urging caution when it comes to the survival of the Siniora government. It's essential that the government of Lebanon survive this crisis.

We've worked hard to free -- and we being the international community -- worked hard to free Lebanon from Syrian influence. And there's a young government there. And it's in our interest that Syria stay out of Lebanon, and this government survive. And so in our consultations with countries in the neighborhood, we have urged all to address the problem -- that would be Hezbollah, and its terrorist attacks on Israel.

Remember, this started, this crisis started when Hezbollah captured two Israeli soldiers. They were unprovoked -- Hezbollah were unprovoked, and they then took hostages. Imagine how the United States would react if somebody provoked us with that kind of action. And secondly, started firing rockets. And it's this provocation of Hezbollah that has created this crisis, and that's the root cause of the problem.

All right, thank you all.