For Immediate Release
Office of the Press Secretary
July 16, 2006 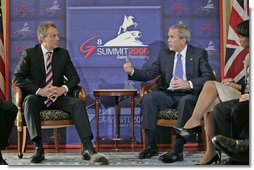 We talked about trade. We're both committed to a world that trades freely. All in all, it's a typical Blair-Bush conversation -- it was wide-ranging and conclusive. And I appreciate your insight and your thoughts.

PRIME MINISTER BLAIR: Well, thank you very much, Mr. President. The President has indicated to you the subjects we discussed. And we went through basically all of the international agenda, as evidence of a very strong common agreement on the key questions.

Q Israel's offensive in Lebanon appears to have no end in sight at this point. Are you willing to go along with Lebanon's call for a ceasefire?

We, of course, are in continued discussions with Israel. All sovereign nations have the right to defend themselves against terrorist attacks. However, we hope that there is restraint as people respond. And one of our concerns, of course, is the fragile democracy in Lebanon. So in order to solve this problem, the international community must address the root causes, otherwise there may be apparent calm and then all of a sudden there will be more conflict.

Remember, Hezbollah started this by capturing two Israeli soldiers and firing rockets into Israel. And as we talk about Hezbollah, we must always remember that there is an issue in Gaza, as well. And we've discussed this issue and we will continue to work with the parties involved to solve that issue, as well.

Q Last night President Putin said that if you asked him about Russian democracy, he had some questions to ask you about Lord Levy. Do you feel that your ability to play a role in international states is now being seriously undermined by Lord Levy's activities? 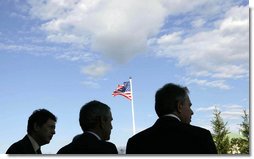 PRIME MINISTER BLAIR: No, I don't. I think I'm sure we will have a discussion not just about that, but about the full range of international issues that we've been discussing, including obviously, the most pressing issue on the international agenda at the moment.

Q Do you expect him to raise Lord Levy with you?

Q Mr. President, you've talked here about your concern about the fragility of the democracy in Lebanon, and the Prime Minister there calling for a ceasefire. Do you think that's needed now to protect his government? And, if not, why?

PRESIDENT BUSH: My message to Israel is that as a sovereign nation, you have every right to defend yourself against terrorist activities. And, again, I repeat, this started because Hezbollah decided to capture two Israeli soldiers and fire hundreds of rockets into Israel from Southern Lebanon. That's the cause of the crisis.

And so our message to Israel is, look, defend yourself, but as you do so, be mindful of the consequences. And so we've urged restraint.

Q What about a ceasefire?

But let's step back for a minute. We were making progress toward a two-state solution, two democracies living side-by-side in peace. There's a Prime Minister from Israel, Olmert, who is dedicated to a two-state solution. He comes to the United States and holds a press conference and says, I am dedicated; as a matter of fact, I am so dedicated, I'm campaigning on the platform that if need be, we will unilaterally make the decision that there's a Palestinian state. That's a remarkable statement. He also said that he is willing to reach out to President Abbas, which he has done. He's also reached out to other nations in the neighborhood in order to -- in order to make sure there's a negotiated settlement.

As progress was being made, it obviously scared those who can't stand the thought of democracy. So you have the militant wing of Hamas act first, and then you had Hezbollah act. And in order to solve this problem, Dick, the world must address the root causes of the problem.

And so we have said to Israel, and we're in touch with Israel a lot -- remember, there's a fledgling democracy on your northern border, which will ultimately help you achieve the peace you want. And today, here at the G8, we'll discuss this issue. And it's a -- one of the interesting things about this moment is it's now become clear to a lot of people why we don't have peace in the Middle East. It's a moment of clarification. And therefore, it's a moment that requires all of us to work together, to send a clear message, not only to Hezbollah, but to the Iranians, who finance Hezbollah, and to the Syrians who house Hezbollah.

Q Mr. Prime Minister and Mr. President. Do you get a sense among the other leaders who are gathered here today that you are all on the same wave length when it comes to the Middle East? Or do some leaders have very different views about what's happening there?

PRESIDENT BUSH: I think most leaders are now beginning to recognize the root cause of the problem. Clearly, the Prime Minister does. And our respective political directors and foreign ministers and Secretary of States have been talking about this issue a lot. And there seems to be a consensus growing that in order for us to have the peace we want, that the world is going to have to recognize that there are terrorist elements who are dedicated to stopping the advance of democracy and peace. And, therefore, we must deal with those. And I repeat, there are two nation states that are very much involved with stopping the advance of peace, and that would be Iran, and that would be Syria.

Q Mr. Prime Minister, can I just ask you on this, the Russians have said they feel Israel's use of force is excessive. What do you think of that? And could you just spell out exactly what influence the Russians, you think, have or could have in this situation?

PRIME MINISTER BLAIR: Well, I think everyone is going to work very hard to find a common and unified position. But the essential point is this: We all want the situation to clam down, and we want it to calm down because we're mindful of the need to protect Lebanese democracy, and we're also deeply mindful of the need to try to reengage people with the negotiated process towards a two-state solution, Israel and an independent, viable state in Palestine.

Now the question is, how do we calm it down from this position now? And as the President was just saying a moment or two ago, the absolute essence of this, the only way we are going to get this situation calm and we're going to get the cessation of hostilities, is if we address the reasons why the situation has arisen. And the basic reasons are that there are extremists who want to interrupt the process that can lead to that two-state solution -- Israel with its security protectors, a proper independent Palestinian state -- and there are also extremists backed, I'm afraid, by Iran and by Syria, who want to disrupt the positions in Lebanon and who want to create a situation of tension and hostility there.

So if we're going to make this work -- and we've got the U.N. mission that is out there now, and that's obviously very important, and we support it -- if we want to make this work, we have got to deal with those underlying conditions that have given rise both to the problem in the Gaza and the problems into Lebanon. And I hope very much that everybody here, because we have a common position in supporting Lebanon and its democracy, and supporting the security of Israel, and supporting the two-state solution -- since we're agreed on those basic fundamentals, we should be able to agree on a position here. And I think it would be a very good signal to send out to the world at this moment, that we can agree to such a position.

I think that sometimes, for understandable reasons, there's been a hesitation in putting the real truth of this situation up to people, and the fact is there are those out in that region, notably Iran and Syria, who do not want this process of democratization and peace and negotiations to succeed.

PRESIDENT BUSH: Let me just say one thing. You've triggered a brilliant thought. (Laughter.) A couple of points. Kofi Annan is going to be here, and the United States, as well, supports the mission in the region. Secondly, of course, all of us care deeply about the loss of innocent life. And in thinking about that, I remember a year ago what took place during the G8 hosted by Tony. There were terrorist attacks in London, and there was a loss of innocent life. And there was outrage, as there should have been, and a determination to work together to protect life.

And that same determination must be applied to the Middle East, as well. The terrorists will do anything to achieve objectives. They went into London subways, they'll fire rockets into Israel, all aiming to disrupt, to destroy, to prevent free societies from flourishing, because they don't agree with freedom. And the stakes are high. And the stakes have been clarified once again, during yet another G8. And Tony and I will call upon our fellow leaders to come together and to make it clear that we reject this kind of violence, and that we will be steadfast in our support of freedom.