For Immediate Release
Office of the First Lady
July 14, 2006

MRS. BUSH: Well, I've been very interested in this issue in the United States and internationally, as well. I visited a number of AIDS sites in Africa.

And last March, at the White House, we announced a partnership between pharmaceutical companies around the world -- not just in the United States, but other countries, as well -- along with several major hospitals, research hospitals, to figure out a way -- because antiretrovirals can be toxic to children because of their small size and weight -- figure out the best way to treat children with antiretrovirals, knowing that they'll take them for the rest of their lives if they have HIV. 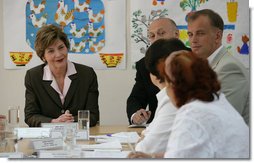 And I hope you all will be a part of that partnership, as well, in Russia, and in your practice here at this center. But you're right, if we can have a whole generation that's HIV-free because their mothers are treated with antiretrovirals before they deliver, and their children don't get AIDS, then we've made a huge step in eradicating AIDS.

And of course, part of the problem in the United States and here and around the world is that a lot of women are not tested, and so they don't know during their pregnancies to start on antiretroviral treatment, and they deliver babies with HIV too late to have taken the treatment themselves.

So we all need to reach out to mothers to make sure they are tested, that they know what their HIV status is. This year I spoke at the United Nations, UNAIDS. And the United States has one day of the year that's testing day, that is publicized everywhere for people to be tested for AIDS. And I think we ought to have an international day for testing, as well, to really get the word out around the world for people to be tested for AIDS, because, like Dr. Voronin said, people can live normal lives with HIV/AIDS. Children live normal lives, and adults have the chance to live long, normal lives, as we are seeing around the world, if you can get on antiretrovirals. And of course, no one will get on drugs if they don't know that they're HIV-positive. So all of us need to work to reduce the stigma associated with HIV.

Thank you all very much. Thank you for your good work. I know you think those children want a family, and I know they do. But you've provided a family for them. I can tell they're happy. 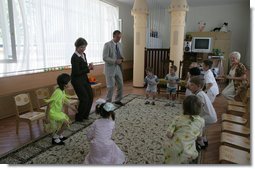