For Immediate Release
Office of the First Lady
July 13, 2006

MRS. BUSH: Thank you very much. I want to especially thank you, Mr. Gawenda, for the warm welcome to this beautiful country, and also the welcome this historic library.

I also want to recognize the Lord Mayor of Stralsund. The Mayor is here with me, and his wife, Mrs. Lastovka. Thank you all very much for joining me today. 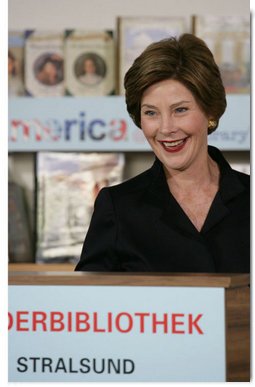 Mrs. Stadler, the head of the children's library is here, as well. And thank you very much for being with us.

And then our Ambassador, the wife of the Ambassador from the United States to Germany, Sue Timken. Thank you, Sue, for joining us.

And also joining us are members of the United States embassy staff, who are responsible for America@yourlibrary being here in Stralsund, and I want to thank them very much, as well.

And of course, and especially, the students who have joined us today. Thank you very, very much for welcoming me here to your city.

I'm delighted to be here today to open America@yourlibrary in Stralsund, in partnership with the United States embassy. This children's library, this beautiful library where we are now, will now serve as a valuable resource for information about the United States of America.

Books in this America@yourlibrary collection tell the story of the United States, describing my country's history, unique culture, and diverse society, and also, as you can tell from some of these on the bottom, a lot about American sports.

American authors will also visit here in Stralsund to talk about the literature that children in the United States enjoy. And information about study abroad programs will help Stralsund's young people see firsthand the historical sites and cities that they can read about in these books.

Reading is a wonderful way to develop new interests, to perform better in school, and to have fun. But the benefits of reading extend far beyond the library or the classroom. As the people of Stralsund know very well, reading and being able to learn and discuss ideas freely is a basic requirement for a healthy democratic society.

The United States and Germany are allies and friends today because our countries both treasure freedom and share a deep love of learning. But around the world, more than 800 million people cannot read; almost 100 million of them are children. 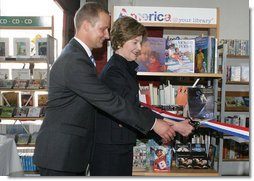 Developed countries with high literacy rates, like Germany and the United States, share a responsibility to help increase literacy, particularly in the world's developing countries.

To help governments ensure that children and adults in their countries learn to read, we'll host a White House Conference on Global Literacy in New York this September during the United Nations General Assembly.

With the help of the United States Department of Education, the United States State Department, USAID, and UNESCO, we'll provide a forum where U.N. member states can examine literacy programs that work, and learn how to implement these programs in their countries. And I welcome Germany's contributions to this international effort.

Thank you all very much for welcoming me here. May the ties of friendship that form between Germany and the United States be strengthened as a result of America@yourlibrary. (Applause.)

MRS. BUSH: Okay, who has a question?

Q Welcome, Mrs. Bush. What is your first impression of Stralsund?

MRS. BUSH: We've had a really wonderful first impression. This is a beautiful city. We're staying on the Baltic at a beautiful hotel where we landed last night, and then we helicoptered into Stralsund today. And it's so beautiful, really lovely.

Q What are the positive and negative things about being the First Lady?

MRS. BUSH: Well, there are a lot of positive things about being First Lady. First, I get to do things like this. I get to visit beautiful countries all around the world and meet with really fascinating heads of state, like your Chancellor, Angela Merkel, who I've had the chance to meet twice in the United States, and now have the opportunity to visit in her home constituency. Those are the best things.

And of course, in our country, I get to do the same thing -- travel all around the United States, meet people everywhere in my country who are doing really great things. That's fun and interesting.

Q In what ways do you support children? 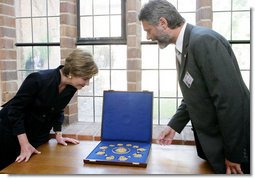 I also talk about human rights worldwide, about women's issues, about the issues of women's rights in the Middle East -- Afghanistan, especially. I meet with a lot of women from Afghanistan, women leaders in Afghanistan. Those are both issues that I talk about, at home and as I travel abroad.

So I'll be hosting this Conference on Global Literacy with UNESCO next year -- next September during the United Nations General Assembly. And the conference will be for world leaders and policy-makers from all around the world to come and learn ways we can increase literacy rates worldwide, especially in developing countries where there are low literacy rates.

Q I know that you've got a teacher's degree.

Q So what subjects did you teach?

But what I liked best was the reading part, and the literature part. So I went back to graduate school and got a graduate degree in Library Science, and then ran the school libraries after that.

Q Have you got any connections to famous superstars? (Laughter.)

MRS. BUSH: Let's see. No, not really. We've had a number of, obviously, actors and actresses to the White House. I'm trying to think of who you would know as a famous superstar.

We did just take Prime Minister Koizumi from Japan to Graceland, the home of Elvis Presley. I don't know if you all are too young to know who Elvis Presley is, but he was a very famous American rock and roll singer -- the first one, really.

Q What kind of books do you read?

MRS. BUSH: Oh, what kind of books do I read? I read a lot of fiction. I like fiction best. But I also read biography. I read biographies about American leaders, other Presidents and their families who lived in the same house we live in right now, lived in the White House. So I like to read both history, biography and then fiction. I enjoy literature. Poetry, I love that.

Q Do you sometimes help your husband to make political decisions?

MRS. BUSH: Sometimes. We talk about a lot of different issues, and there are a lot of issues that he works on that I'm also really interested in, like women's rights that I talked about earlier, and education issues in the United States, I'm particularly interested in. So we talk about those issues.

Q What did you think about the match of the U.S.A. soccer team in the world championship? (Laughter.)

MRS. BUSH: Well, I guess we did not do very well, but we did play Germany, and I think that's when we lost, isn't it, the last time when we were out.

You know, Americans really don't know that much about soccer. And the World Cup still was very interesting to Americans. Americans watched. We watched the games when the U.S. played, but we also watched the finals between France and Italy at the White House. My husband and I watched those games together.

But Americans really are just learning about soccer. It's a new sport to the United States. I guess you can tell it's a new sport by the way our team plays. (Laughter.)

Okay, well, thank you all very much. It was great to get to meet you all.