For Immediate Release
Office of the Press Secretary
July 11, 2006 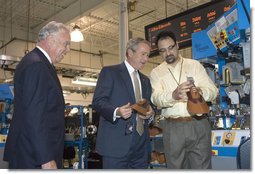 When you make investments, it makes your company more productive. And when you're more productive, it makes you more competitive. So the tax cuts we passed have helped this company. It made a lot of sense. They've also helped our county. This economy of ours is growing. The unemployment rate is 4.6 percent nationally. That's good news for workers. People are making more money. And that's good news for workers.

And as a result of a growing economy, we collected more money for the Treasury. I told the American people we would keep spending down and keep pro-growth policies in place to help cut the deficit in half by 2009. As a result of the Mid-Session Review, the numbers that came out of the Mid-Session Review, I'm able to tell the American people we'll cut the deficit in half by 2008. The projected budget deficit over -- of over $420 billion is now assumed to be $296 billion. See, what happens is when you grow the economy by cutting taxes, more tax revenues come into the Treasury, and that's what we're seeing here.

I'm looking forward to working with Congress to make sure that we continue to hold spending down; set priorities and to be wise about how we spend the money. And one of the problems we have in Congress is sometimes Congressmen and Senators stick unnecessary spending into bills. And I believe the President needs a line-item veto to help make sure that there's fiscal responsibility in Washington, D.C.

I'm traveling with Congressman Ryan. He is the sponsor of the House bill, and I appreciate his leadership on this issue. The United States Senate needs to get the line-item veto to the President's desk so that the American people can have confidence in our ability to be wise about how we spend the money. This practice about stuffing stuff into these bills that never gets a hearing or the light of day is just -- it's just not right. And one way to bring fiscal sanity to Washington, fiscal discipline to Washington is to give the President the line-item veto. 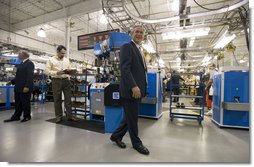 MR. STOLLENWERK: You're a little late.

THE PRESIDENT: But these shoes last a long period of time. I intend to be wearing them for a lot of Fourth of Julys in -- coming. This is an American -- an American-based company making good American products. And I'm proud -- proud of what you're doing here, John.

I'll tell you something interesting, so we're working the floor out there, talking to the people who make this company grow, and he knows everybody's name. That's a good sign. That's a caring -- that's a caring chief executive officer who cares first and foremost about the people here on the floor. And guess what happens when you have somebody like that who takes care of his workers, they make good product. So I'm proud to be an Allen-Edmonds customer. And I'm proud to be here at this factory. And thanks for having me.

MR. STOLLENWERK: And a paying customer at that.

THE PRESIDENT: Oh, yes. (Laughter.) Part of the accountability system in Washington. (Laughter.) Thank you all.

THE PRESIDENT: No comments today, thank you very much. 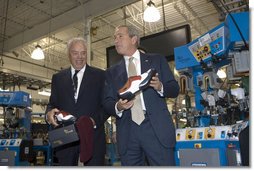