For Immediate Release
Office of the First Lady
July 10, 2006

China:
The Clinton State Service was commissioned to commemorate the 200th anniversary of the White House with designs inspired by architectural motifs - from the State Dining Room on the dessert and soup plates to the cream soup cup and saucer. 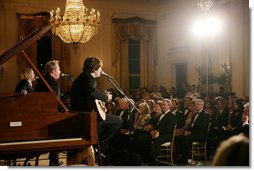 Rascal Flatts receives rave reviews from critics and fans alike for their energy-packed concert performances and high tech stage production. Gary LeVox, Joe Don Rooney and Jay DeMarcus began playing for a handful of people in a club in Nashville's Printers Alley in the late 1990's.

By any measure, Rascal Flatts is in elite territory. In the first six months of 2006, with outstanding sales of their new album, "Me and My Gang," the band has risen to the top of the country music world. The CD, released in April, debuted at number one on the Billboard Top 200 and Top Country albums charts with sales of over 700,000 and has gone on to sell double platinum. No other act has debuted higher or sold more recordings in 2006. And the "Me and My Gang" tour will perform to 900,000 fans in 75 cities before it ends in November 2006.