For Immediate Release
Office of the Press Secretary
July 6, 2006

THE PRESIDENT: It's been my pleasure to sit here and talk to our Ambassador from Iraq. I want -- first, Zal, I thank you for your service. I really appreciate your family supporting you on this very important mission. I know the Secretary of State and the National Security Advisor join me in saying it gives us great comfort to know that we've got a man of your caliber there. It's a hard job. And Zal has earned the confidence of the new Iraqi government, and I was able to see that firsthand in how the Prime Minister and other members of his administration related to him. 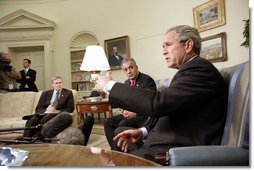 He brought back a report that is realistic. On the one hand, he said they've got a good government -- goal-oriented people who are working to achieve certain objectives. And I know that you've been impressed by Prime Minister Maliki's determination to succeed, and his willingness to lay out a common-sense agenda and then hold people to account.

Zal also said it's still a dangerous place, because there are people there that will do anything to stop the progress of this new government. And you have to ask yourself, who's afraid of democracy? I mean, why would people be afraid of a peaceful civil society? And the answer is, people who want to not only harm Iraq, but want to harm us.

And I've assured Zal that -- to assure the Iraqi people that when we give our word, we'll keep our word. And we intend to work closely with the government and to help defend the people until this government is more capable of defending itself.

And he talked about police training. There's more work to be done in training the police. And we talked about the training of the army, and it's gone quite well. Zal is concerned about foreign influences in the country, as am I.

I do appreciate your briefing on the Prime Minister's recent trip in the neighborhood, which looked like a very successful trip. We, of course, are concerned that some in the neighborhood may want to derail the progress of a free Iraq. And that is troubling and something that we'll work on.

But, Mr. Ambassador, you represent our country with a lot of class and dignity. And so, thank you. You may want to say a few comments.

So it's an honor to see you again. And happy birthday, Mr. President.

THE PRESIDENT: Thank you, sir. Thank you all.