For Immediate Release
Office of the Press Secretary
July 5, 2006

PRESIDENT BUSH: We'll have opening statements and a couple of questions. 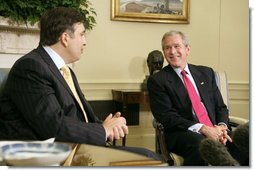 It was made fantastic because my friend not only was a good host, but he is a man who shares the same values I share. He believes in the universality of freedom. He believes that democracy is the best way to yield the peace. The Georgian government and the people of Georgia have acted on those beliefs. I want to thank you for your contribution in Iraq, to help the Iraqi people realize the great benefits of democracy. It's hard work, but it's necessary work.

We had a very good discussion about a variety of topics. I assured the President that Georgia is our friend and we care deeply about the people of Georgia. So a remarkable experience has taken place. I congratulate the President and his government on creating an economic climate that fosters growth and opportunity. I love the stories about the entrepreneurial spirit that's beginning to flourish.

One of the interesting stories that captured my imagination is when the President first came into office and he cleaned out the police forces in order to rid the country of corruption in the law enforcement -- understanding full well that the people must trust security in order for a society to flourish.

And so, Mr. President, you've got hard work ahead of you. You've tackled problems with vigor and enthusiasm. But, most importantly, you've stayed true to a philosophy that I admire. So welcome back to the Oval Office, and please give your good wife all my very best.

PRESIDENT SAAKASHVILI: I will certainly tell Sandra. Mr. President, it was an incredible honor for me to stand next to you in the Freedom Square in Tbilisi. And I felt like it was, you know, after -- it was vindication for all those Georgians, including my family members, who perished in gulag, who died fighting for their freedom, their liberty, their independence. And, basically, this was an incredible occasion because I'm also -- I've studied diplomacy for many years, and I can tell you it was brilliant exercise of self-diplomacy, the way you appreciated our culture, our openness, our warmth. And we will certainly never forget it.

Georgia is, indeed, performing. It has strong economic growth. This is a very beautiful country that attracts lots of investment now. We have low tax rates, but we dramatically increased our tax collection, which means that low taxes and less government is a very good thing to have, as you well know.

So basically we are getting there. And one thing, you know, we discussed with President Bush the upcoming G8 summit. And, certainly, there are lots of issues that are at stake there and we believe very strongly in the same values, in the same principles, and we are talking to the President -- to the country which is the -- for Georgians, for generations of Georgians, American freedom are synonymous -- they have been synonymous for me all my life, when I lived under Soviets and after that. And it still stays very much that way, because all freedom-loving people today, whenever they have something to share with somebody, come to America. And this is a very strong thing.

And one thing I can tell, Mr. President, your freedom agenda does, indeed, work. I mean, you can see it in Georgia. We are seeing it in Iraq. And please stay there, please fight there until the end. We will stay with you there, whatever it takes, because your success in Iraq is success for countries like Georgia. It's a success for every individual that loves freedom, every individual that wants security, to live in more secure world for himself, herself or their children. And whatever it takes to help you, we are not a big country -- we are beautiful, small country with a lot of attractions -- I invited you to come, I had mountain biking here yesterday and I invited you to come over and have mountain biking in Georgia.

But one thing is important, that you know we really cherish the same things. And I'm so honored to be here on Independence Day, and I watched yesterday fireworks -- and around the time of your birthday. So happy birthday. I'm honored to be invited now. (Laughter.) And God bless you, America, Georgia, and the whole world. Thank you, very much.

Q Mr. President, on North Korea, how is it possible to punish a country that is one of the poorest and most isolated in the world? And secondly, had you been hoping for a stronger response from China?

PRESIDENT BUSH: The North Korean government can join the community of nations and improve its lot by acting in concert with those who -- with those of us who believe that she shouldn't possess nuclear weapons, and by those of us who believe that there's a positive way forward for the North Korean government and her people. In other words, this is a choice they made. Yesterday, as you know, they fired off a series of rockets. The world had -- particularly those of us in the six-party talks -- had asked for that not to happen. It's a matter of good faith. The government made a different decision.

And so it's their choice to make. What these firing of the rockets have done is they've isolated themselves further. And that's sad for the people of North Korea. I am deeply concerned about the plight of the people of North Korea. I would hope that the government would agree to verifiably abandon its weapons programs. I would hope that there would be a better opportunity to -- for that government and its people to move forward. The Chinese will play -- have played and will continue to play a very important role in the six-party talks. It's my view that the best way to solve this problem diplomatically is for there to be more than one nation speaking to North Korea, more than America voicing our opinions.

And therefore, the five of us -- Russia, South Korea, Japan, China, and the United States -- spoke with one voice about the rocket launches, and we will work together to continue to remind the leader of North Korea that there is a better way forward for his people.

PRESIDENT SAAKASHVILI: You know, regarding the -- I mean, I'm not intervening off the agenda, but one thing I have to tell you, in Georgia that I just sent over to President Bush the letter that Georgian freedom fighters sent seventy years ago, and it never made it to the White House. It was intercepted by KGB and all the people who wrote it were shot.

I'm sure lots of people out there in Korea are writing similar letters today. And I'm sure that North Korean missiles will never reach the United States, but those letters will, eventually, very soon, because that's a part of the freedom agenda that President Bush has and we strongly believe in.

PRESIDENT BUSH: Do you want to call on a Georgia? Please.

Q Georgia is planning -- to NATO. What do you think how can Georgia finish this IPP process and get Membership Action Plan? And do you think that Georgia should and will be a NATO member during your presidency? Thank you, sir.

PRESIDENT BUSH: Listen, I believe that NATO would benefit with Georgia being a member of NATO, and I think Georgia would benefit. And there's a way forward through the Membership Action Plan. And we -- we'll work with our partners in NATO to see if we can't make the path a little smoother for Georgia. Georgia has got work to do, and the President understands that. And I'm a believer in the expansion of NATO. I think it's in the world's interest that we expand NATO.

Q Thank you, sir. On the North Korean missiles, what have you learned about their intentions or their capabilities, and what threat level do you think they still possess given that their intercontinental missiles failed?

PRESIDENT BUSH: I spoke with Secretary Rumsfeld yesterday. He called me right after the launch, and he said they had preliminary information that they are going to analyze about the trajectory of the larger rocket. The other five rockets that were fired, the scuds, were -- their performance was pretty predictable. It's kind of a routine weapon that some of these nations have.

I asked him this morning, again, when I met with him about the information. They're still analyzing, trying to figure out the intention of the North Korean leader as to why he would have fired the rocket and what they were trying to learn from it.

One thing we have learned is that the rocket didn't stay up very long and tumbled into the sea, which doesn't, frankly, diminish my desire to solve this problem. So the first part of your question is, we're still analyzing what the intentions were. We're trying to analyze the data to determine flight path, for example.

I view this as an opportunity to remind the international community that we must work together to continue to work hard to convince the North Korean leader to give up any weapons programs. They've agreed to do that in the past, and we will hold them to account. And I also strongly believe that it is much more effective to have more than one nation dealing with North Korea. It's more effective for them to hear from a group of nations rather than one nation.

And so today the Secretary of State, starting last night, the Secretary of State has been in touch with counterparts. I, of course, will be on the phone, as well. We want to send -- to continue to send a clear message that there is a better way forward for the leader of North Korea. It's hard to understand his intentions. It's hard to understand why he would not only fire one missile that failed, but five others. So we're talking with our friends and allies on the subject.

Q Mr. President, as you mentioned, you've faced a lot of important challenges in many places, like Iran, Iraq, Afghanistan and North Korea. And at the same time, the whole world recognizes your personal role in promoting democracy and freedom all around. And how do you think, is there any chance that Georgia's aspiration to build free and democracy country may be left off of your agenda?

I understand that elections are only the beginning of the freedom agenda, and that there's work needed to be done around the world, including our own country, to continue to build strong institutions and build the organizations necessary for a civil society to develop. Remember, ours was a country that wrote a great Constitution but enslaved people for a hundred years. It takes time. And so I understand that. And I want to work with our friends that ask. Georgia is a sovereign government, and when governments say, will you help, America must always listen to requests for help, and specifically to Georgia.

One of the signature pieces of policy in my administration has been the Millennium Challenge Account. It's a foreign funding mechanism that recognizes countries that fight corruption, support rule of law, invest in the health and education of their people, and adopt open markets. And one of the most robust Millennium Challenge Account projects is with Georgia. It's a sign -- should be a sign to the people of Georgia, and people in the neighborhood, that the United States respects the decisions this government has made, and wants to work closely with the people of Georgia to help Georgia succeed, to help create the conditions for success.

And so to answer your question, yes, I've got a lot that comes to my desk here, absolutely. I've got a lot to think about. But my friend, the President, wouldn't be sitting here if I didn't have Georgia on my mind. (Laughter.)