For Immediate Release
Office of the First Lady
July 5, 2006

MRS. BUSH: Thanks so much. Thank you very much, Secretary Dobriansky. And Mr. Minister, welcome. It's very nice to have this chance to get to meet you and be with you today. And Ambassador, thanks so much, again. 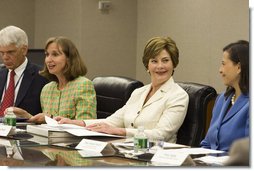 I've also been able to welcome to the White House a number of Afghan women, both teachers who are training here at the University of Nebraska, each one of those classes, or Afghan women who are here working in partnership with the Afghan Women's Council, Afghan American Women's Council.

One of the major projects that I've been the most involved in and the most interested in is the Women's Teacher Training Institute in Kabul, which I did visit when I was there. After September 11th, when American women especially looked at Afghanistan, American women were really, I'll have to say, shocked that women were not allowed to be educated, that girls were not allowed to be educated. It was something that none of us really could imagine. And immediately, women, American women, stood up to stand with the women of Afghanistan. I saw it everywhere. When I gave the radio address about Afghanistan, women who sell cosmetics at the department store that I went to right after that thanked me, and I could tell they were standing with the women of Afghanistan, and really felt a sisterhood with them and wanted them to be able to succeed.

So all of us knew, and this is what we were already interested in anyway, in my office, it's what we were working on, and that's education in the United States, education here. So it seemed, really, a natural step to talk about education in Afghanistan and education specifically for women, but for boys, too, for girls and boys, we need, really, excellent education. 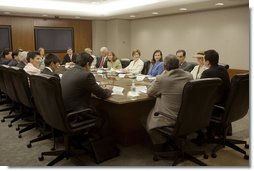 So we've started with the idea of the Teacher Training Institute, which would give -- a dorm which would give women a safe place to live when they were in -- at Kabul University in the Teacher Training program, and would also have the effect of educating as many women as possible -- and men -- educating as many teachers as possible so when they went back to their provinces they could, in a cascading effect, educate more teachers so we could educate as many teachers as possible.

This fall, I'm going to be convening, in New York, along the time of the United Nations General Assembly, with United States Department of Education and the U.S. State Department, USAID and UNESCO, a conference on global literacy. And we're going to -- it will be during the time of the UNGA when world leaders will be there from around the world. And it's a way for us to meet, really, every country to come together, every U.N. country to come together and talk about what we can all do to make sure -- what each government can do to make sure that children and adults are literate in their countries.

So I have this opportunity to invite you all and to invite people from Afghanistan then, to come then, and I hope you'll be there with me.

So, welcome. Good to see you.