For Immediate Release
Office of the Vice President
July 1, 2006

THE VICE PRESIDENT: Well, thank you all very much. And let me thank the Frances for inviting me tonight. This is my first in-person NASCAR event. And I'm delighted to be here. I'm told that if I behave myself I might be able to spend some time after the race with Big Mike in the Nextel Cup Hauler. (Laughter.) And that that is sometimes more exciting that what happens in the race itself, so I'm looking forward to that. 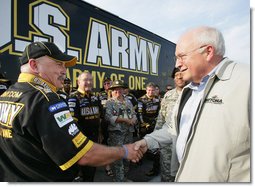 But seriously, I want to thank everybody associated with NASCAR and especially the drivers and the crew chiefs. I know you guys have spent a lot of time with the troops, and supporting the troops and the men and women of the armed forces, especially those who are in Afghanistan and Iraq and a lot of other places around the world.

You've got, obviously, a huge following among the men and women of the United State s military. It means a great deal to them that you're willing to spend time demonstrating your support for them. I know some of you have been to Walter Reed in Bethesda, spent some time with the folks who've come back wounded from their service to the nation. And I know on behalf of the President and myself, we greatly appreciate it. It means a great deal to all of us that you're willing to demonstrate that kind of support for them -- know you do a lot in your communities, the major activities and support for the charities and so forth. And NASCAR has developed a hell of a reputation not only obviously for stock car racing but also for being tremendous members of the community.

So thank you for all of that. Let me wish you a safe race tonight, and I look forward to spending the evening here at Daytona. So thank you all very much.